Study Finds Running, No Matter How Much, Has Cardiovascular Benefits 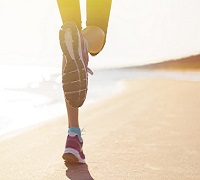 A new study from a team of Australian investigators is shining new light on the positive cardiovascular benefits of running.

The study, which reviewed more than a dozen studies, found any amount of running once per week could decrease a person’s risk of death, cardiovascular disease, and cancer, regardless of sex.

To evaluate potential association between running participation and the amount of running with risk of all-cause, cardiovascular, and cancer mortality, investigators from the Victoria University in Melbourne conducted a systematic review and meta-analysis of 14 studies. For inclusion in the analysis, studies needed to be designed as prospective cohort studies, participants needed to be 18 or older, studies had to have non-clinical study populations, and report an association between participation in running or jogging and mortality risks.

To identify studies for inclusion, investigators performed a search of PubMed/MEDLINE, Scopus, EBSCOHost, and Web of Science databases from inception to February 2019. Searches were performed using keywords including jogging, running, runner, mortality, death, and fatal.

A total of 14,403 unique abstracts were identified by investigators, of which 42 were assessed for eligibility. Of the 42, 14 met inclusion criteria and were included in the current analysis.

From the 14 studies, investigators had a pooled sample that included 232,149 participants. A total of 25,951 deaths occurred during follow-up periods, which lasted from 5.5 to 35 years in length.

Additionally, investigators pointed out results of the study indicate sex had no impact on the health improvements derived from running. The study’s results also revealed no evidence that mortality benefits increase with greater amounts of running.

“Any amount of running, even just once a week, is better than no running, while higher doses of running may not necessarily be associated with greater mortality benefits,” investigators wrote. “Increased rates of participation in running, regardless of its dose, would probably lead to substantial improvements in population health and longevity.”

This study, titled “Is running associated with a lower risk of all-cause, cardiovascular and cancer mortality, and is the more the better? A systematic review and meta-analysis,” was published in the British Journal of Sports Medicine.