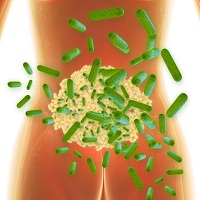 The role of gut microbiota in the development of asthma and allergic diseases is the focus of a brief review published in the August, 2016, issue of Current Opinion in Allergy and Clinical Immunology. According to the review’s authors, the gut is first colonized before and during delivery by maternally derived bacteria, and a critical window may exist during early life when gut dysbiosis exerts the greatest influence on immune development.

Delivery mode, antimicrobial treatment during the perinatal period, infant feeding, and the environment may all influence the composition of the gut microbiome and alter the risk of asthma and allergic disease.

Under optimal conditions, step-wise colonization of the gut leads to a diverse bacterial profile and primes the immune system to tolerate commensals and dietary antigens and react against pathogens appropriately. High biodiversity in the gut microbiome may increase the production of short-chain fatty acids (SCFA), induce immune regulatory pathways, and promote an anti-inflammatory response. In contrast, low biodiversity in the gut microbiome has been associated with decreased production of SCFA, which leads to a shift towards the production of T helper 2 cells and a pro-inflammatory response.

The types and proportions of bacteria that protect against immune-mediated disease remain unclear. However, a Canadian study found that a decreased relative abundance of Faecalibacterium, Lachnospira, Rothia, and Veillonella in early infancy was associated with an increase in the risk of asthma. And in another study, a high level of a biomarker of intestinal inflammation at age 2 months predicted the development of asthma and eczema by age 6 years and was linked to a low abundance of fecal E. coli.

Continue Reading (Page 2) >>
Click here to sign up for more MD Magazine content and updates.
Related Coverage >>>
Pediatric Primary Care Visits Declining Since 2008
JUUL Use Significantly Jumped Among Young US Adults Since 2018
Sex Hormones Linked to Asthma Risk
You May Also be Interested in
Most Popular
Gene Alteration Provides Hope for Type 1 Diabetics
Sex Hormones Linked to Asthma Risk
Future of Thromboprophylaxis and Final Thoughts
Pediatric Primary Care Visits Declining Since 2008
The Many Causes of Involuntary Weight Loss: a 3-step Approach to the Diagnosis