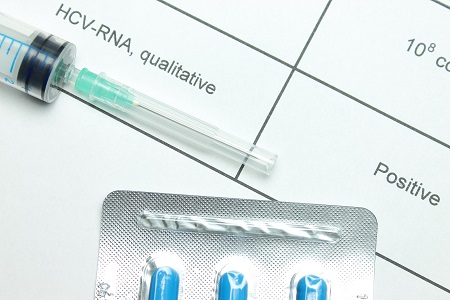 In many cases, the latest treatments for hepatitis C virus (HCV) infection are at least 90% effective at curing the infection; however, there still remains a subset of patients who don’t respond to the new medications. Led by researchers in Germany, a study was conducted to see how ribonucleic acid (RNA) assessment can be used to predict outcomes before the end of treatment.

Therapy options for hepatitis C now include sofosbuvir (SOF), ribavirin (RBV), pegylated-interferon-alfa (PegIFN), simeprevir (SMV), and daclatasvir (DCV). The research team studied 298 patients with hepatitis C, genotypes 1 to 5, treated with the following medication combinations: RNA data was collected from the participants at baseline and at weeks one, two, four, eight, 12, 16, 20, and 24. RNA Levels were measured by both CobasAmpliPrep/CobasTagMan v2.0 (CAP/CTM) and Abbott RealTime HCV (ART) assays.

Published in the Journal of Hepatology, the results showed that hepatitis C RNA levels in people with HCV genotype 3 who achieved sustained virologic response (SVR) were significantly lower during the first four weeks of SOF/RBV treatment than the levels observed in those who ended up relapsing.

“All genotype 3 patients with a week two result of <45 IU/ml by CAP/CTM achieved SVR, but only 33% of those with >45 IU/ml” achieved SVR, the authors reported. “Similar results were documented with ART and 60 IU/ml as cut-off (SVR: 100% vs. 29%).” However, there was no significant relationship with RNA levels during early treatment and the other treatments.

“Hepatitis C RNA levels assessed at week two of SOF/RBV therapy can predict relapse in genotype 3 patients,” the team confirmed. More sensitive ART may be able to pick up on RNA levels at later stages of SOF-based therapies, but that doesn’t not mean treatment should be extended.