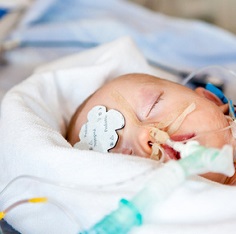 Anesthesia can cause brain injury in infants, but so far such damage it is difficult to detect. A George Washington University team says it may have found a way to do that by examining a patient's retina.
While other retrospective studies associate having anesthesia with the later appearance of cognitive and behavioral disorders in young children, this one indicates that what happens in the retina of the eye reflects what happens in the brain.
In a murine study, Richard J. Levy, MD, of the division of anesthesiology and pain medicine, Children’s National Medical Center, The George Washington University School of Medicine and Health Sciences, Washington, DC, and colleagues investigated the effects of isoflurane exposure on the retinas of mice pups.
Half of the animals were exposed to isoflurane for an hour and the other half breathed room air.
After the exposure, they looked at the animals' retinas to see how much activated caspase-3, capase-9, and caspase-8 were present.They also looked at cytochrome c release from retinal mitochondria, and the number and types of cells undergoing apoptosis.
They found  that isoflurane activated the intrinsic apoptosis pathwayin the inner nuclear layer (INL) and activated both the intrinsic and extrinsic pathways in the ganglion cell layer. Immunofluorescence demonstrated that bipolar and amacrine neurons within the INL underwent physiologic cell death in both cohorts and that amacrine cells were the likely targets of isoflurane-induced apoptosis. After injection, fluorescent-labeled annexin V was readily detected in the INL of both air-exposed and isoflurane-exposed mice and co-localized with activated caspase-3-positive cells.
"These findings indicate that isoflurane-induced neuronal apoptosis occurs in the developing retina and lays the groundwork for development of a noninvasive imaging technique to detect anesthesia-induced neurotoxicity in infants and children," they concluded.
Their paper, “Anesthesia-Induced Neuronal Apoptosis in the Developing Retina: A Window of Opportunity” appears in Anesthesia & Analgesia. .
“Because the retina provides a window to the central nervous  and can be imaged noninvasively, our findings create an opportunity to explore anesthesia-induced neuronal degeneration in the developing retina as a potential surrogate for neurotoxicity in the brain. Ultimately, we may be able to develop a noninvasive imaging modality to determine whether anesthesia-induced neuronal apoptosis occurs in infants and children,” the team concludes.

Click here to sign up for more HCPLive® content and updates.
Related Coverage >>>
FDA Approves Cocaine Hydrochloride Nasal Anesthetic Solution
Combination of Diet and Exercise Slows Cognitive Decline in Older Patients
IV Meloxicam Receives Second CRL from FDA
You May Also be Interested in
Most Popular
Machine Learning Model Could Predict Outcomes Following Cardiac Arrest
The Fear of the Coronavirus, and the Reality of the Flu
Implementing Price Transparency Tools at Ambulatory Care Centers
Ketamine Could Be a Reliable Alternative for Pain Relief, Sedation in ICU
Methotrexate Increases Risk of Adverse Events Compared with Placebo