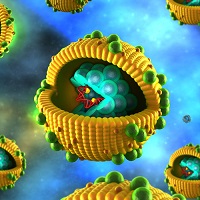 Researchers say they have discovered a new human virus confirmed from genetic screenings of blood samples that appears to be linked to hepatitis C but it is unknown whether it can cause disease.

Called the human pegivirus-2 (HPgV-2), the novel virus was discovered by a team of researchers from Abbott Laboratories, the University of Chicago and University of California at San Francisco. The findings were published this month in the journal PLOS Pathogens.

“We are just beginning to explore the clinical ramifications,” study coauthor Andrew Aronsohn, MD, a liver specialist and assistant professor of medicine at the University of Chicago states in the article. “Does it make a difference to the infected person’s health? Does it work with hepatitis C to make patients even sicker? We don’t yet know. We only know that a blood-borne virus, never before detected, is out there.”

The index case was a 70-year-old University of Chicago patient with liver damage from hepatitis C, which treatment with interferon failed to cure. Her risk of infections was elevated by frequent blood transfusions related to her sickle cell disease.

Following this initial discovery, the research team found evidence of the virus in a total of 12 out of 2,440 patients who had their blood screened, which indicates that the virus is not common. The HPgV-2 virus was found only in people (982 patients) who also had hepatitis C, according to Aronsohn.

The team of researchers used metagenomics sequencing to identify eight complete genetic strains of the previously unknown HPgV-2 virus, which like the hepatitis C virus is also bloodborne, states a separate release issued by Abbott.

“Based on our findings, our team used the genetic makeup of the virus to develop both a molecular test for detecting it in the bloodstream and an antibody test for determining an immune response to the virus,” John Hackett Jr, PhD, Abbott’s divisional vice president of applied research and technology states in the release. “Our next step is to explore whether this new virus can cause disease, and if so, work with blood banks to continue to help safeguard the world’s blood supply against these types of new viruses.”

The authors note in an addendum to the journal article that while their paper was under review, another study published earlier this year in the journal mBio reported on the discovery of a novel virus named “hepegivirus 1” that was found in serum samples from people given blood transfusions. It was about 96% identical to the HPgV-2 virus index case in their study, they said.

Click here to sign up for more HCPLive® content and updates.
Related Coverage >>>
COVID-19 Lockdown Having an Impact on Adolescent Mental Health
Benjamin Click, MD: Real World Impact of the TARGET-IBD Registry
Benjamin Click, MD: The COVID-19 Impact on the TARGET-IBD Study
You May Also be Interested in
Most Popular
Consuming More Whole Grains Could Lower Diabetes Risk
Incarceration Devastating for Kids: How Big Bird Is Helping
Comparing RT-PCR and Chest CT for Diagnosing COVID-19
Discovery of Brain Receptor Structure Could Improve Epilepsy Drugs
The 10 Worst Things Patients Can Say to Physicians