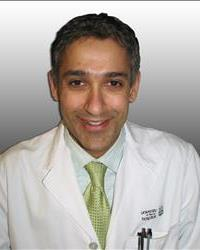 A study of "real world" asthma treatment with omalizumab (Xolair) found patient response reflected the rates and levels of symptom reduction reported in clinical trials, and that fractional exhaled nitric oxide (FeNO) could be useful in selecting those most likely to respond.

Mohit Bhutani (pictured), MD, — Division of Pulmonary Medicine, Department of Medicine, University of Alberta, Edmonton, Alberta, Canada — and colleagues conducted the ASTERIX study, a 1 year open-label observational study at 25 clinics across Canada in patients with moderate to severe allergic asthma who had not previously received omalizumab. Omalizumab was added to their treatment regimen, and outcomes were compared to those of the preceding year.

"Often in randomized controlled clinical trials, patients may be excluded for various reasons," Bhutani told MD Magazine. "The study is helpful to make sure that the effect seen once the product is commercially available is what was seen in the relevant clinical trials."

Theirs was not the first evaluation of omalizumab in settings outside clinical trials, but Bhutani noted its value in ascertaining regional experience, as well as its contribution in assessing the utility of FeNO measurements. Elevated FeNO has previously been found predictive of responsiveness to inhaled corticosteroid (ICS).

"The study is important to make sure that the effect of the intervention is true in the Canadian population as asthma triggers, management differs here than in other countries,” Bhutani said. “It also may be helpful to payers, both public and private, to know that the drug they are funding is beneficial.”

"Unique to our study was the measuring of FeNO as a biomarker for patient selection," Bhutani said. "Based on other studies, a cut-off of 19.5 ppb of FeNO was chosen to see if there was a differential effect."

Bhutani and colleagues identified 99 patients across multiple sites with inadequately controlled moderate to severe asthma, marked during the preceding year by 2 or more severe asthma exacerbations requiring an oral corticosteroid (OCS) despite high dose ICS and at least 1 other controller agent, or requiring OCS maintenance for at least 3 months.

Baseline assessments prior to the first omalizumab injection included pulmonary function testing and completion of the Asthma Control Questionnaire (ACQ) and the Asthma Quality of Life Questionnaire (AQLQ). In addition, the FeNO was measured in a subset of study participants, at the 10 sites having the equipment and using standardized techniques and calibration.

The investigators reported a 71% reduction in asthma exacerbation and 56% of patients on omalizumab remaining exacerbation free compared to the year prior to the study. They note that these improvements corresponded to reduction in health care utilization and that there were also significant improvements in ACQ and AQLQ measures. Patients with an elevated FeNO at baseline demonstrated a better response to treatment.

"From the study, patients had a more impressive response to omalizumab when compared to below that level (19.5ppb),” Bhutani said. “The effect was seen below 19.5 ppb but it was better above that mark.”

"This is a phase 4 study with limitations of this kind of a study, which we recognize in the article, but this still provides valuable information to clinicians, patients, and Canadian health systems," Bhutani said.

The study, "The real world effect of omalizumab add on therapy for patients with moderate to severe allergic asthma: The ASTERIX Observational study," was published online in PLOSone last month.

Click here to sign up for more HCPLive® content and updates.
Related Coverage >>>
Experts Advise on Asthma Care, Management during COVID-19
Dupilumab Hits Phase 3 Endpoints for Eosinophilic Esophagitis
Advancing Biologic Research in Asthma
You May Also be Interested in
Most Popular
Adam Friedman, MD: Returning to Normal During the COVID-19 Pandemic
Free Webinar, Derm Clinical Updates: Keeping Up with COVID-19
Immunotherapies at the Forefront of COVID-19 Treatment Research
Top 10 Painkillers in the US
Study Finds Marijuana Use Not Linked to Increased Stroke Risk