DECEMBER 28, 2015
Bill Schu
Over the next few weeks, we’ll take a high-level look at the positions of the leading nominees for President when it comes to political issues potentially impacting physicians. 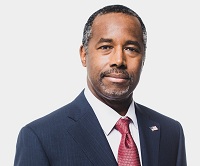 Ben Carson, MD, has been steadily gaining ground in the Republican nomination for President. At one point polls suggested he had pulled even with summer front-runner Donald Trump, and he continues to poll well in Iowa and other early-indicator states. Carson is well known to the medical community because of his extraordinary career as a pediatric neurosurgeon, from which he retired in 2013. Carson’s medical expertise and role as a long-time physician offers him hands-on knowledge of our healthcare system, but how does that knowledge translate to his political views?

Overall: Like Donald Trump, and most of the GOP candidates, Carson would like to see the Affordable Care Act (ACA) repealed. He has repeatedly called the ACA a “looming disaster,” and he has spoken at length about his desire to replace it with something that builds the physician-patient relationship. While the specifics of how he would replace it have been sparse, Carson talks often about the need to expand access to Health Savings Accounts, and the need to limit government’s role in health care. According to Carson, HSAs “empower families to make their own decisions about their medical treatment.” He posits that they also drive down health care costs while protecting patient choice and freedom.

Abortion: Carson is unequivocally pro-life. On his campaign website, Carson notes, “As a surgeon, I have operated on infants pre-birth. I can assure you that they are very much alive.” Carson supports the Pain-Capable Unborn Child Protection Act, which would make it illegal to have an abortion more than 20 weeks after fertilization, allowing exceptions for rape, incest or in cases in which the life of the mother may be in danger. While it is unclear if Carson as President would push to overturn Roe v. Wade, he has said on the campaign trail that he would appoint judges and justices with records that include rulings that were in favor of protecting the unborn.

Carson has come under criticism by some in the pro-life movement for instances in his medical background in which he referred pregnant patients with medical difficulties to doctors willing to perform the procedure. Carson, for his part, says that doing so was part of his responsibility as a physician and came in the context of complicated medical decisions. Carson’s Communications Director, Ben Watts, told Politico in September, “[Carson] does not think the issue is one that can be legislated as much as having to win the hearts and minds of people, to discover the morality or immorality of abortion. He is unequivocally, completely, positively opposed to abortion.”

Other issues: Carson’s response to Donald Trump’s inference of a connection between   vaccination and autism in the first Republican debate this past September was, at best, tepid. While Carson denied that there was a connection, he and fellow candidate Rand Paul (an ophthalmologist) came under additional fire for suggesting that additional time between vaccinations was a good idea. The recommended scheduling of childhood vaccinations is based on years of well-validated research.