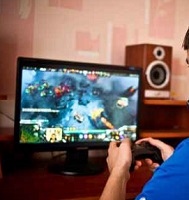 A video game may help people with post-traumatic stress disorder (PTSD) focus better and gain control of their reactions to triggers.
One of the troubling symptoms of PTSD is an inability to concentrate because their attention is too focused on potential threats. This can lead to difficulties in executive functioning and the ability to complete tasks.
Computer programs designed to retrain the attention system have been found to be useful in populations with various anxiety disorders, who are primed to pay too much attention to perceived threats. This imbalance in attention focus is called threat-related attention bias. However, these programs have not shown similar success in the subset of anxiety patients with PTSD.
Two studies conducted in the U.S. and Israel may shed light on why.
In one study, Yair Bar-Haim, Ph.D., of the School of Psychological Studies at Tel Aviv University and colleagues evaluated the level of threat-related attention bias in patients with PTSD, patients with other anxiety disorders but no PTSD, and a control group made up of students. Those with PTSD had significantly higher attention bias scores compared to the other groups. The team then calculated attention bias variability, the degree and speed with which patients oscillated between threat-vigilance and threat-avoidance—numbing or zoning out.
The second study looked at whether a different computer program would work better.
Daniel Pine, MD, of the National Institute of Mental Health in Bethesda, MD, and Yair Bar-Haim, PhD, School of Psychological Studies at Tel Aviv University conducted two studies, one among veterans of the Israel Defense Forces and one among U.S. veterans, all with diagnoses of PTSD who had seen combat within the previous three years. The participants were randomized to one or the other training program.
In both games, participants were asked to hit a keyboard button to select a target that appeared next to one of two images, one of which was threatening and one of which was neutral. The Israeli group used word pairs, while the U.S. group used photographs of faces.
In attention bias modification, the target reliably appeared by the neutral target, training the participant to focus their attention on less threatening stimuli. This kind of computer training program has been shown to help people with generalized anxiety disorder and social phobia, who tend to be highly attuned to threatening triggers.
The attention control training program used the same method, but the targets appeared by neutral or threatening targets with equal frequency. This required participants to ignore threats that were irrelevant to the task at hand.
Participants did four or eight sessions of attention bias modification or attention control training over four weeks while waiting to start conventional treatment (therapy and medication). In addition to the attention bias and variability measures, they also had patients fill out a Patient Health Questionnaire and a PTSD Checklist before and after the training sessions.
At the end of the study, for both the U.S. and Israeli groups, participants experienced a reduction in PTSD symptoms and reduced attention bias variability. However, those randomized to attention bias modification did not see a reduction in symptoms. Neither program reduced depression symptoms.
“Our results indicate that attention control training, more so than attention bias modification, not only helps regulate attention bias variability in PTSD patients, but also results in significantly reduced trauma-related distress as assessed by both self- and clinician-reported PTSD severity,” the authors wrote in the July 24 issue of the American Journal of Psychiatry.