Potential Chlamydia Vaccine Would Be Administered Without a Needle 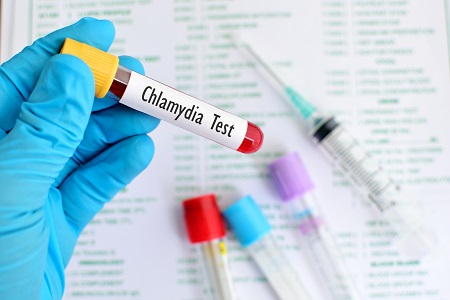 Chlamydia is the most commonly reported sexually transmitted disease (STD) in the United States, according to the Centers for Disease Control and Prevention (CDC), and now the first steps toward creating a vaccine have been accomplished.

A team from the Michael G. DeGroote Institute for Infectious Disease Research at McMaster University in Ontario has developed the first widely protective vaccine against an STD that impacts 113 million people worldwide each year. Although chlamydia is curable, it can cause infertility, upper genital tract infections, and pelvic inflammatory disease if left untreated. One of the big challenges with the disease is that most patients don’t show symptoms, so many people aren’t getting the treatment they need.

“Vaccine development efforts in the past three decades have been unproductive and there is no vaccine approved for use in humans,” co-author David Bulir, PhD, said in a news release. The researchers created BD584, a novel chlamydial antigen, which could become a vaccine against Chlamydia trachomatis (C. trachomatis) – the most common form of the STD.

According to the study published in the journal Vaccine, the antigen proved to reduce symptoms of C. trachomatis – including chlamydial shedding by 95% and hydrosalpinx (involved in the fallopian tubes) by 87.5%.

“Vaccination would be the best way to prevent a chlamydia infection,” Bulir continued, “and this study has identified important new antigens which could be used as part of a vaccine to prevent or eliminate the damaging reproductive consequences of untreated infections.”

BD584 may be able to be able to protect against all strains of C. trachomatis, the authors confirmed.

“The vaccine would be administered through the nose. This is easy and painless and does not require highly trained health professionals to administer, and that makes it an inexpensive solution for developing nations,” explained co-author Steven Liang, PhD student at McMaster.

From here, the researchers plan to test the potential vaccine in different strains and formulations.

Click here to sign up for more MD Magazine content and updates.
Related Coverage >>>
Flu Cases Reach 13 Million in the US, CDC Reports
Miscarriage Associated with High Levels of Post-Traumatic Stress
Certified Nurse-Midwives Improve Pregnancy Outcomes
You May Also be Interested in
Most Popular
Overcoming Physician Burnout During the Winter
Geographic Variation in Procedure Use Among Medicare Recipients
This Is How HIV Enters the Nucleus of Immune System Cells
Use of IL-23 Inhibitors to Treat Plaque Psoriasis
Minorities Disproportionately Cared for in ICU