Physical Activity at Any Intensity Associated with Lower Risk of Death 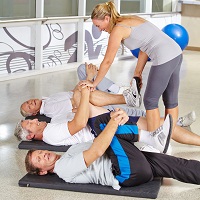 A new study is providing evidence of the impact of physical activity, at any intensity, on lowering a patient’s risk of early death.

Results of the study from the National Institute for Health Research (NIHR) in Europe has found that increased physical activity, regardless of intensity, was associated with a lower risk of death while more than 9.5 hours of sedentary time increased the risk of death.

"These results are fantastic. It has previously been widely assumed that more is better in terms of physical activity for health,” said study investigator Tom Yates, PhD, professor of physical activity, sedentary behaviour and health at the University of Leicester. “However, this study suggests health may be optimized with just 24 minutes per day of brisk walking or other forms of moderate-intensity physical activity.”

To evaluate dose-response associations between accelerometer assessments total physical activity, different intensities of physical activity, and sedentary time and all-cause mortality, investigators conducted a systematic review of 5 databases. After performing a search of PubMed, PsycINFO, Embase, Web of Science, and Sport Discus from inception of the databases until July 2018, 518 studies were identified by investigators.

Of those 518 studies, 39 were retrieved for full text review and 10 were eligible for inclusion. After applying further inclusion criteria, 8 studies were included in the final analysis — 2 of the studies were unpublished and identified through personal contact.

Upon analysis, investigators found that any levels of physical activity were associated with a reduction in the risk of mortality with a non-linear dose response. In terms of hazard ratios for mortality, the HR among the least active quarter was 1.00, 0.48  in the second quarter, 0.34 in the third quarter, and 0.27 in the fourth and most active quarter.

Investigators also noted the risk of death increased as sedentary time increased. HRs for increasing quarters were 1.00 for the first quarter , 1.28 (1.09 to 1.51) for the second, 1.71 (1.36 to 2.15) for the third quarter, and 2.63 (1.94 to 3.56) for the fourth and most sedentary quarter after adjustment for age, sex, BMI, socioeconomic status, wear time, and time spent in moderate-to-vigorous intensity physical activity.

This study, “Dose-response associations between accelerometry measured physical activity and sedentary time and all cause mortality: systematic review and harmonised meta-analysis,” was published online in the British Medical Journal.