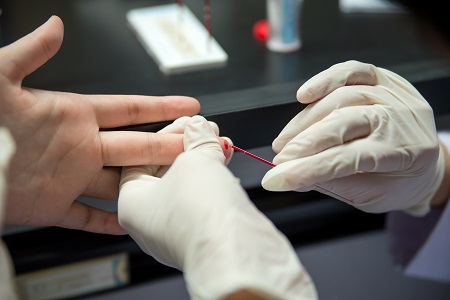 Heterosexual sex accounts for an estimated 24% of new HIV infections annually, but mistaken beliefs about the relative safety of such activity leads to insufficient testing among high-risk individuals. Thus, as many as 25% of all infected heterosexuals are undiagnosed (compared to about 15% of all HIV cases) — which makes them more likely to further spread the disease by engaging in risky behavior.

Investigators compared two of the most popular strategies for breaking the cycle in a central Brooklyn neighborhood where many residents exhibit three of the most significant risk factors for undiagnosed heterosexual infection: low income, substance abuse problems, and black or Hispanic ethnicity.

The study actually tested two similar peer-referral strategies. Investigators recruited a small number of high-risk heterosexuals, tested them, educated them about HIV risk factors and asked each of them to recruit a few high-risk friends or acquaintances—who then recruited a few of their high-risk acquaintances and so on.

Both methods bested a venue-based sampling strategy that saw investigators go to venues which seemed like likely hangout spots for high-risk individuals. The investigators then offered education and testing to people at these venues and found undiagnosed HIV in just 0.3% of the 403 people who underwent testing.

“The three interventions were designed to address the specific barriers to HIV testing that HHR experience, and all three interventions were culturally appropriate for African American/Black and Hispanic HHR,” said principal investigator, Marya Viorst Gwadz, PhD, a senior research scientist from the Center for Drug Use and HIV Research at New York University’s Rory Meyers College of Nursing.

People diagnosed with HIV through either of the peer-referral methods during the first part of the study will be randomly assigned to intervention or control during the “treat and retain” half of the study, which will assess outcomes using medical records and biomarkers such as HIV viral load.

The investigators targeted central Brooklyn because its population had the highest total risk factor rate of any area in New York City and because prior research indicates that its residents are less likely than some groups to get tested on their own.

“These ‘heterosexuals at high-risk’ for HIV, who are mainly African American/Black and Hispanic, have serious barriers to regular HIV testing,” said co-author Noelle R. Leonard, PhD. “Many of the barriers are related to race/ethnicity and lower social status, including: fear of HIV stigma; distrust of medical settings; substance use problems; and the sense that heterosexuals are not at risk for HIV compared to other risk groups—such as men who have sex with men or persons who inject drugs.”

Related Coverage:
One Overlooked Factor Drives African American’s Vulnerability to HIV
PrEP Stigma and Uncertainty May Be Hindering Use of the HIV Preventive
HIV Initiatives in the Works: Self-Testing, Needle Programs, Vaccine Trial

Click here to sign up for more MD Magazine content and updates.
Related Coverage >>>
Flu Cases Reach 13 Million in the US, CDC Reports
Investigators Link Farm Proximity Residence to C. Difficile
The 10 Most Read Articles of 2019
You May Also be Interested in
Most Popular
Top 10 Painkillers in the US
Overcoming Physician Burnout During the Winter
The Birth of a New Decade: Will We Finally Improve Maternal Care in the US?
Processed Meat Associated with Greater COPD Risk
HeartMate 3 Improves Patient Outcomes, Regardless of Transplant Eligibility