Patients With Gout Are At a Significantly Greater Risk for AMD 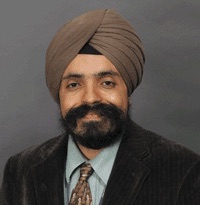 Jasvinder Singh, MD, MPH
A novel association of gout has been linked to cases of age-related macular degeneration (AMD) in the elderly.

In an analysis of Medicare claims data collected from 2006-2012, researchers from the University of Alabama at Birmingham School of Medicine—led by Jasvinder Singh, MD, MPH, professor of medicine and epidemiology for the Division of Clinical Immunology and Rheumatology—found that incident rates of AMD were nearly 40% greater in people with gout versus those without the arthritic condition.

The association between AMD and gout gives merit to a previous prospective study in which patients with rheumatoid arthritis significantly increased their risk of AMD, with a rate ratio of 1.15—indicating a link between inflammation and AMD pathogenesis.

Singh and researchers looked into the 5% Medicare claims data from the selected time range, for all beneficiaries enrolled in fee-for-service programs and not in the Medicare Advantage Plan. All observed enrollees resided in the US. Researchers censored people at the occurrence of new AMD diagnosis, death, or end of study, whichever occurred first. They adjusted for demographics, comorbidity, and use of medications to treat cardiovascular disease and gout.

In the observational cohort analysis, 116,097 (6.9%) of the 1.6 million-plus eligible people developed AMD. The incidence rates of AMD per 1000 person-years were 20.1 for people with gout and 11.7 for people without. In their multivariable-adjusted analyses, researchers distinguished a significant association of gout diagnosis with a higher risk of incident AMD (hazard ratio 1.39; 95% CI; 1.35-1.43).

Researchers theorized this associated may be linked to gout’s association with hyperuricemia, a condition linked to increases in oxidative stress and urate-crystal association inflammation.

“Oxidative stress is as an important pathway for AMD,” researchers wrote. “Treatment with antioxidants (vitamins and zinc) reduced the risk of developing advanced AMD and treatment with ranibizumab, a VEGF monoclonal antibody, reduced the loss of vision, or in some cases improved vision in AMD. Therefore, oxidative stress and systemic inflammation pathways are potential mechanisms for the higher AMD risk with gout in the elderly.”

Researchers suggested that anti-oxidants such as Vitamin C and E could delay or even reduce the risk of AMD in patients with gout, as they have been proven to have a beneficial effect in patients with AMD. This effect may be even greater in conditions such as gout, which is characterized by oxidative stress.

Gout is considered the most common inflammatory arthritis, affected about 3.9% of all US adults. Its prevalence increases age—significantly so after ages 65 and 75, researchers noted. It shares this characteristic with AMD, the leading cause of blindness in adults aged 50 years or older in developed countries.

Though the exact mechanisms for AMD are still unclear to clinicians, further understanding of the association between the 2 conditions will soon be more critical— the population of adults 65 years or older in the US will reach 70 million by 2030, researchers wrote.

“Future studies should investigate the pathways that put patients with gout at higher risk of AMD,” researchers wrote. “Randomized trials are also needed to assess whether the use of anti-oxidants in this patient population can simultaneously reduce the risk of AMD and of gout disease activity.”

The study, "Gout and the risk of age-related macular degeneration in the elderly," was published online in PLOSone last week.