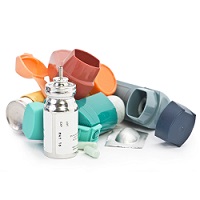 Hormone tests administered to adult patients who used inhaled steroids to treat asthma suggests that such treatments may be associated with adrenal insufficiency.

Investigators performed a rapid adrenocorticotropic hormone stimulation on 121 consecutive asthma patients who have been using inhaled steroids for at least 6 months. They then used median figures for treatment dosage and duration to divide the cohort into both long-term and short-term users and high-dose and low-dose users before comparing adrenal function among the 4 groups. (The mean duration of use turned out to be very different between short-term [3.8 years] and long-term [11.5 years] users.)

The study was not sufficiently powered to find significant associations between cumulative exposure to inhaled steroids and adrenal insufficiency, let alone establish a causal relationship. However, even with a relatively small number of patients, analysis did uncover a significant relationship in short-term users between daily and cumulative inhaled steroid doses and serum cortisol levels 60 minutes after taking adrenocorticotropic hormone (R = -0.300 and -0.287, respectively; p < 0.05).

The new study is not the first to find a connection between the usage of inhaled steroids and adrenal function. However, most prior research has focused on the dangers of adrenal insufficiency after patient stopped using corticosteroids.

Time was also a consideration. The longer patients used corticosteroids, the greater their risk of developing adrenal insufficiency upon discontinuation.

The authors of both studies recommend more frequent testing of adrenal function in asthma patients who use corticosteroids for any period of time. The authors of the meta-analysis added that patients can also help detect their own problems. Adrenal insufficiency often creates noticeable symptoms such as fatigue, dizziness, weight loss and salt cravings.