Obese Children Twice as Likely to Have Gallstones 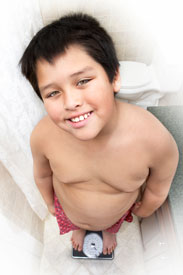 Overweight children and adolescents are at least twice as likely as their peers to have gallstones, according to a study published in the Journal of Pediatric Gastroenterology and Nutrition.

After studying the electronic health records from 510,000 children ages 10 to 19, from 2007 through 2009, researchers from Kaiser Permanente found that children and adolescents who were moderately obese were four times as likely as their peers to have gallstones, and those that were severely obese were six times as likely.

“Although gallstones are relatively common in obese adults, gallstones in children and adolescents have been historically rare,” lead author Corinna Koebnick, PhD, of the Kaiser Permanente Southern California Department of Research & Evaluation, said in a release. “These findings add to an alarming trend — youth who are obese or extremely obese are more likely to have diseases we normally think of as adult conditions.”

Gallstones affect approximately 20 million adults in the United States. Symptoms can include abdominal pain and nausea, but many with gallstones do not have symptoms. Gallstones can block the passage of bile into the intestine, which can cause damage or infection in the gallbladder, pancreas, or liver. If untreated, it can be fatal.

The researchers found a greater link between obesity and gallstones in girls than in boys. Girls that were obese and severely obese were six and eight times more likely to have gallstones than their underweight or normal weight peers. Obese and severely obese boys were more than two or three times as likely as their underweight or normal weight peers to have gallstones.

Senior study author George Longstreth, MD, a gastroenterologist from Kaiser Permanente San Diego Medical Center, said the high rate of gallstones in obese children may be surprising to pediatricians because it is generally considered an adult disease.

“With childhood obesity on the rise, pediatricians can expect to diagnose and treat an increasing number of children affected by gallstone disease,” Dr. Longstreth said in a release. “It is important to identify other factors that increase risk as well.”

Some risk factors for gallstones include having a family history of the disorder, having diabetes, and losing weight quickly. Eating a diet high in fat and cholesterol may also increase risk of developing gallstones.

The study is part of ongoing research that aims to identify and treat childhood obesity. The Kaiser Permanente Southern California Children’s Health Study found that 5.5 percent of girls and 7.3 percent of boys under the age of 20 are severely obese.

Click here to sign up for more HCPLive® content and updates.
Related Coverage >>>
Ustekinumab Successful as a Target Therapy for Crohn's Disease
Tweet Chat on Healthcare System Improvement Scheduled for February 17
Maternal Vitamin D Deficiency Increases Risk of ADHD in Offspring
You May Also be Interested in
Most Popular
The Fear of the Coronavirus, and the Reality of the Flu
Machine Learning Model Could Predict Outcomes Following Cardiac Arrest
Ketamine Could Be a Reliable Alternative for Pain Relief, Sedation in ICU
How to Spot a Bad Doctor
Vaping Guidance Aids Respiratory Disease Screening and Care