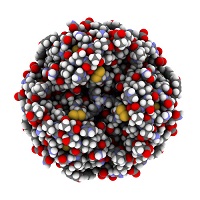 Traditional folk art contains small mistakes that affirm the idea that Man’s creations cannot be perfect. So it is with natural and manufactured insulin.

Now researchers in Denmark may have found a way to get the manufactured product a little closer to nature’s original design.

Natural insulin assembles into homogenous grid-like structures called hexameres. The more regular the structure, the more evenly the insulin can be released from the pancreas into the body.

Manufactured insulin, on the other hand, can contain irregularities in its structure.

Knud J. Jenson, PhD, a professor at the University of Copenhagen in Denmark, working with researchers from the Technical University of Denmark and Novo Nordisk, have developed a new technique to design insulin-based drugs with greater uniformity. The resulting drugs could lead to more personalized medicine with fewer side effects.

All insulin molecules have compounds called bipyridines on the ends that serve as a hook to attach to other molecules.

The team has come up with a method to get manufactured insulin to self-assemble in a homogenous chemical grid. By hooking an Iron II atom to the bipyridine, they could control insulin assembly with greater precision. The new Iron II method causes insulin to self-assemble into nanostructures that are well suited to form deposits in fatty tissue, where injected insulin gets stored.'

“It is absolutely clear that this could be a good method for designing medications that release over extended periods of time, from depots beneath the skin," Jensen said in a release, adding "because we are able to control the insulin's self-assembling properties so precisely, I believe that the method can also be used to design insulin with a variety of properties."

In rats, the new insulin caused blood sugar levels to fall, leaving the team optimistic about the new method. The team also imaged the insulin grid structures so that they could state, with certainty, that adding Iron II would really assembled homogenously.

"We have discovered an entirely new method of modifying a molecule - insulin - that is important for 35 million diabetes patients. We are incredibly happy with that," Jensen said in a release.
The report appears in the January 14 issue of Angewandte Chemie.