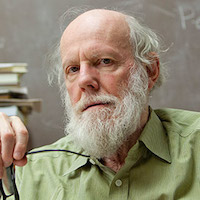 A team of investigators are taking an entirely new approach to the future of studying Alzheimer disease by zeroing in on the environmental factors that may be linked to the disease.

Caleb Finch, PhD, of the University of Southern California’s (USC) Leonard Davis School of Gerontology, and Alexander Kulminski, PhD, of the Social Science Research Institute at Duke University, have proposed new framework dubbed the “Alzheimer’s Disease Exposome,” which they said will address some of the gaps in knowledge regarding the environmental factors that interact with genetic factors to increase or reduce the risk of the disease.

In an interview with MD Magazine®, Finch explained how environmental factors have been overlooked in the past, but could be crucial in gaining a better understanding of Alzheimer disease.

“So, this is a review or theoretical article, which is intended to stimulate discussion on how environment interacts with Alzheimer risk genes and Alzheimer risks in general, which is a subject that is obvious to everybody,” Finch said. “So, starting with the major shared common risk factor for Alzheimer's genetic risk factor, we have circumstances in which the environment increases its power, its potency for Alzheimer's risk.”

While increasing age is the most important risk factor known for the disease, other risk factors such as environmental exposures are poorly understood. In the past, a study of Swedish twins suggested that half of individual differences in the disease may be environmental.

The investigator are considering 2 classes of Alzheimer disease genes in the exposome model—the dominant familial genes and gene variants such as apolipoprotein E4 (APOE4), where risk increases along with more copies of the genes.

Cited in their article is a study that showed the onset of dementia was a decade earlier for carriers of a dominant Alzheimer gene living in cities and who came from lower socioeconomic backgrounds or less education.

Finch said the first well-known environmental risk factor for the disease is head injuries and the second is air pollution, which is what the investigators are currently working on in their new paper.

However, he said because of the substantial amount of environmental risk factors, it has been difficult to study.

“There are so many different environmental factors, my colleagues who are doing the work on genetics, never really stopped to think that more formal conceptual approach was, was needed,” Finch said. “And that's what we're offering.”

He also said the approach the team is taking is similar to what has been applied to cancer research in recent years.

“So my colleague and I decided to pull this field together under the concept that has been applied to cancer research to look at multiple environmental factors,” Finch said. “[Where we] try and collect and identify all the different levels of environmental influences.”

Finch explained the goal of the exposome will be more environmental factors considered and identified how they influence the Alzheimer risk genes.

He said he anticipates a number of new interactions of risk genes will be identified using this approach, which could yield new programs from funding agencies to support new studies.

The exposome concept extends and leverages the National Institute on Aging/ Alzheimer's Association Research Framework to include gene-environment interactions across individual age and duration of exposure.

Click here to sign up for more HCPLive® content and updates.
Related Coverage >>>
Dream Experiences Shed Light on Neurophysiology of Narcolepsy
Vaccination Recommendations for Older Adults
Depression Linked to All-Cause and Cardiovascular Mortality
You May Also be Interested in
Most Popular
The Fear of the Coronavirus, and the Reality of the Flu
Top 10 Painkillers in the US
Is There a Link between Low Testosterone and Chronic Marijuana Use?
Should Women Age 65 and Older Be on Hormone Therapy?
When to Suspect Diarrhea is Symptom of a Clostridium Difficile