Need a Bone Transplant? Just Print One Out 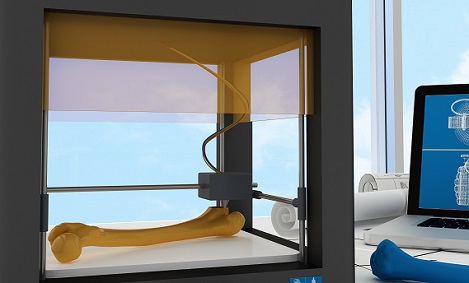 Flexibility isn’t often a word we associate with bones, nor should we. But with the advent of a new synthetic osteoregenerative biomaterial in the form of a 3D-printable ink, doctors and patients may someday have a lot more flexibility in performing bone transplants.

Comprised 90% of hydroxyapatite, a calcium mineral that already occurs naturally in human bones, the material is markedly pliable. It was developed at Northwestern University, and the researchers refer to it as “hyperelastic bone” (HB). A biodegradable polymer makes up the remaining 10% of its composition. Research and results were recently published in the journal Science Translational Medicine.

In vivo animal testing has shown great promise. The researchers tested HB in subcutaneous implants in mice, posterolateral spinal fusion in rats, and in a calvarial defect case study in a non-human primate. Across the board, they found that it “did not elicit a negative immune response, became vascularized, quickly integrated with surrounding tissues, and rapidly ossified and supported new bone growth without the need for added biological factors.”

“Cells can sense the hydroxyapatite and respond to its bioactivity,” says Ramille N. Shah, who led the research, “When you put stem cells on our scaffolds, they turn into bone cells and start to up-regulate their expression of bone specific genes. This is in the absence of any other osteo-inducing substances. It’s just the interaction between the cells and the material itself.”

Were rejection to become a concern, antibiotics could be mixed into the material itself. Its porousness and pliability can be varied to suit the specific needs of the transplant, and it can be tailored specifically in size and shape for the patient’s needs. Because a 3D printer can create one onsite, the turnaround between evaluation and implantation could be quite short, in a potential future where 3D printing takes on a large role in hospital medicine.

Children have few options for bone implants while they are still growing-a surgical implant often requires many more surgeries down the line, so this material may someday prove a breakthrough in the treatment of pediatric bone conditions.