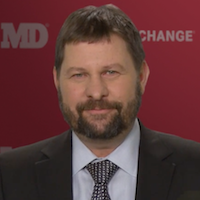 As Clostridium difficile (C. difficile), the bacterium causing diarrhea and more severe intestinal conditions, gains momentum as a fearsome superbug, researchers have hailed metronidazole and vancomycin as the standard treatments.

However, some researchers have recently begun considering fidaxomicin, another potential drug treatment.

During an MDMag Peer Exchange panel discussion, “Fidaxomicin in the Treatment of Clostridium Difficile Infections,” the panelists provided an overview of the new drug, which elicited several questions: Why is it here? How is it different? How does it work? What is it?

Fidaxomicin, a narrow spectrum macrocyclic antibiotic represents “the new thinking” to treat C. difficile infections, according to Yoav Golan, MD, MS, associate professor of medicine at Tufts University School of Medicine and infectious disease physician at Tufts Medical Center, Boston, Massachusetts. Golan pointed out that the routine approach to managing the superbug is complex considering physicians treat C. difficile with an antibiotic even though the package inserts of many antibiotics warn: this use of this antibiotic will increase your patient’s risk of C. difficile.

Unlike any other medical condition, physicians treat C. difficile with a drug considered a risk factor. For C. difficile infection, using vancomycin or metronidazole, antibiotics designed to “decimate the gut flora,” could make things worse.

Many of the latest studies have supported the idea of taking a “no antibiotic” approach to achieve lower recurrence. However, at least for the near future, physicians still must treat their patients’ symptoms with antibiotics. So, the question is how can antibiotics become more targeted?

Golan explained that fidaxomicin represented this new approach in that it is narrow spectrum. While targeting C. difficile and certain other bacteria, it will leave the rest of the gut flora alone. Fidaxomicin works through a different mechanism than some of the other antibiotics; it kills C. difficile using concentrations that are lower than the concentrations required for vancomycin or metronidazole.

According to Golan, there have been 2 large, phase 3 studies that initially assessed cure rates, which showed that fidaxomicin was very similar to vancomycin in providing cures in approximately 90% of patients. In the real world, it’s probably slightly higher for both antibiotics. “But the most important thing is the second part of the study: when you stopped therapy and actually followed those patients for recurrence, in the case of fidaxomicin, the recurrence rate was lower.
One of 4 patients, on average, developed a recurrence if they were treated with vancomycin. One in 8 patients (or about half the recurrence rate) developed recurrence with fidaxomicin—about 13% of patients. “

Fidaxomicin is produced by bacteria. It tends to only affect gram-positive bacteria (and only some gram-positive bacteria). It’s not completely specific to C. difficile--it can affect enterococcus. When monitoring the gut flora over time and studying patients who received fidaxomicin for 10 days, as opposed to metronidazole (Flagyl), the effect on the gut flora is much more limited.

As an RNA polymerase inhibitor, fidaxomicin works by interfering with the bacteria’s ability to transcreate and replicate their DNA. “It’s an RNA toxin in a sense, and without the RNA, there’s no protein synthesis. Without protein synthesis, in the case of fidaxomicin and C. difficile combination, this results in cidal activity.”

Golan continued that there are certain bacteria populations that appear to be protective against C. difficile-causing infection. It’s important to note that fidaxomicin tends not to kill those bacteria, and actually allows them to return while on therapy.

The original Peer Exchange panel discussion, “Fidaxomicin in the Treatment of Clostridium Difficile Infections,” was posted on MDMag.com.