MS: Why Some Patients Have Seizures 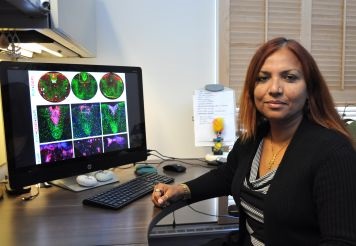 Epileptic seizures in multiple sclerosis (MS) patients are most likely triggered by chronic demyelination, according to a new study.

Patients with MS are 3 to 6 times more likely to suffer from epilepsy, and the risk is highest for patients with early onset MS or progressive MS. In many patients, seizures can be associated with rapid progression and death.

Scientists at the University of California, Riverside, sought to uncover the link between MS and seizures. To test the relationship, Seema Tiwari-Woodruff and colleagues fed laboratory mice a diet containing cuprizone, a copper-binding toxin that inhibits myelin production by damaging oligodendrocytes, the brain cells that produce myelin.

After nine weeks on the cuprizone-inclusive diet, the majority of the mice in the study began to suffer seizures and altered intrahippocampal EEG activity. She said it appear likely the demyelination in humans sets in motion the same triggers.

“It’s very likely this is what is occurring in those patients with MS who are experiencing seizures,” said Tiwari-Woodruff (photo), an associate professor of biomedical sciences at UC-Riverside’s school of medicine.

The results are significant, the researchers say, because they suggest that the mouse model could be a valid starting point for testing further strategies to not only identify the cause of these seizures, but also prevent them.

“Without myelin, axons are vulnerable,” she said “They develop blebs – ball-like structures that hinder transport of important proteins and conduction of electrical signals. In some instances, significant axon damage can lead to neuronal loss. In both MS and our mouse model, parvalbumin interneurons are more vulnerable and likely to die.”

Parvalbumin interneurons play an important role in keeping hyperactivity down. The loss of these interneurons appears to make patients more likely to experience seizures.

“This causes the inhibition to be removed and induce seizures,” Tiwari-Woodruff said. “Thus axonal and neuronal survival may be directly tied to the trophic support provided by myelin.”

Having successfully shown the link between demyelination and seizures in mice, the researchers are now turning their attention to the other side of the equation: If remyelination occurs, will the seizures cease?

“Does remyelination affect seizure activity? Could we accelerate the remyelination with drugs? Can we thus provide some relief for MS patients? We are interested in addressing these questions,” Tiwari-Woodruff said .

To study this question, the researchers are following mice that were fed cuprizone for 9 or 12 weeks, but then were given a normal diet. In those mice, oligodendrocytes began to work again, leading to remyelination. The researchers plan to monitor the mice over time to find out if there’s any impact on seizures. If so, it could suggest that successful remyelination in humans could also reduce seizures. That would be a big deal, particularly given the poor prognosis given to most MS patients with chronic seizure problems.

Tiwari-Woodruff was also recently awarded a grant from the National Multiple Sclerosis Society to study postmortem brain tissue of MS patients with seizures and compare it to the brain tissue of MS patients without seizures. This data could be helpful in determining the extent to which the mouse model is effective as a research strategy for the MS/seizure issue.
The study, titled, “Chronic demyelination-induced seizures,” was published last month in the journal Neuroscience. It can be found online here.