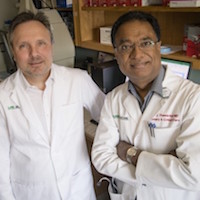 At the conclusion of about 2 years of pre-clinical research, University of Alabama at Birmingham (UAB) Department of Medicine researchers Jaroslaw Zmijewski, PhD, and Victor Thannickal, MD have presented evidence from lung tissue-based analysis which showed the progressive disease can be resolved with acceleration by the non-insulin-dependent diabetes drug.

The observed myofibroblasts were metabolically active and resistant to apoptosis—making them more capable of continuing their role of depositing extracellular collagen fiber as part of the body’s fibrosis process. Researchers concluded that metformin, or another activator called AICAR, can activate AMPK in patient’s lung myofibroblasts and result in lessened fibrotic activity.

Metformin was administered to mouse models subjected to the animal’s form of IPF, and the models reported accelerated resolution of the condition within 3 weeks. Researchers noted the treatment was AMPK-dependent, as models subjected to AMPK knockout did not report similar results.

In speaking with MD Mag, Thannickal, professor and director of the UAB Division of Pulmonary, Allergy and Critical Care Medicine, said the 2-yearlong analysis proved fruitful for a disease with limited resolutions and unlimited scope.

“Some estimates have attributed (IPF) mortality to over 45% of the population when considering the other major diseases it is affiliated with,” Thannickal said. “We don’t have any new drugs that have the potential to stabilize or even reverse the disease.”

Fibrosis can occur in many forms, from tissue disease derived from asbestos to hypersensitivity pneumonitis. IPF itself affects more than 150,000 people in the US annually, with another 40,000 dying from the disease annually. Thannickal noted that rate is similar to that reported in breast cancer, but the disease likely draws less attention because of its prevalence in an elderly population.

Fittingly, targeting metabolism with therapies such as metformin has shown in clinical settings to affect aging itself. But that’s not relevant to the researchers’ goals.

“Our goals at UAB is not to look at longevity treatment, but health span treatment,” Thannickal said. “We want to extend health span, not lifespan.”

A separate consideration as to how metformin treats patient aging may come down the road, though: Zmijewski had applied for a grant through the National Institutes of Health (NIH) to fund such research for later this year.

Going forward, the researchers are hoping to initiate a phase 2, randomized study to test the potential of metformin for patients with IPF in a larger human population. Recognizing that metformin is a readily available off-label therapy, Thannickal advised physicians and patients refrain from prescribing and taking metformin for fibrosis without better research or US Food and Drug Administration (FDA) indication.

That said, the team is expressly excited about a possible anti-fibrotic therapy.

“This is a paradigm that can be extended into other metabolic arrangements in this disease that we’d like to explore, and in the aging process itself,” Thannickal said.