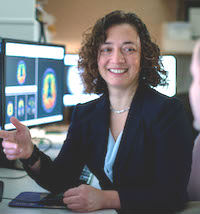 Kejal Kantarci, MD, MS
A new study reveals that taking hormones soon after menopause may not only help alleviate unpleasant menopause symptoms, but also benefit the brain. Specifically, researchers looked at plaque build-up in the brain that is associated with Alzheimer’s disease and memory loss.

"We found that one form of menopausal hormone therapy taken soon after menopause may preserve brain structure in the portion of the brain responsible for memory and thinking skills," said study author Kejal Kantarci, MD, MS, of the Mayo Clinic in Rochester, Minnesota, and a member of the American Academy of Neurology in a statement. "It may also reduce the development of amyloid plaques that can build up and lead to memory loss."

Researchers identified 75 healthy women with an average age of 53, who were between 5 months and 3 years past menopause. Study participants were split into three groups, two taking menopausal hormone therapy and one control group.

Of the 75 participants, 20 women took conjugated equine estrogen (CEE) in pill form, 22 received estradiol via skin patches and 33 received a placebo of either the pills or patches. Additionally, the groups taking active hormones were also given progesterone pills for the first 12 days of each month. Those in the placebo group were given placebo pills instead.

Study participants completed memory and thinking tests as well as MRI scans at baseline, at 18 months, at 3 years, at the end of 4 years of treatment, and at 3 years after the end of treatment. Researchers measured the accumulation of brain lesions, compared scores on the thinking and memory tests, and determined overall brain volume.

A total of 68 participants also completed positron emission tomography (PET) scans to identify plaques in the brain that have been found to relate to Alzheimer’s disease and memory loss.

Researchers found that over the 7 years of the study, patients in the estradiol group maintained brain volume in the dorsolateral prefrontal cortex, an area of the brain that facilitates memory, thinking, planning, and reasoning.

Participants who maintained volume in the dorsolateral prefrontal cortex were also more likely to have fewer amyloid plaque deposits that are related to Alzheimer’s disease and memory loss.

For women taking CEE pills, researchers found greater structural changes in the brain during therapy, but those changes were not seen after patients stopped the treatment.

Researchers also noted that the study was limited because all participants were in good cardiovascular health and that further research will be necessary to determine the impact of menopausal hormone therapies on women with diabetes, heart disease, or other health problems.

This study was published in an online issue of Neurology®, the medical journal of the American Academy of Neurology.