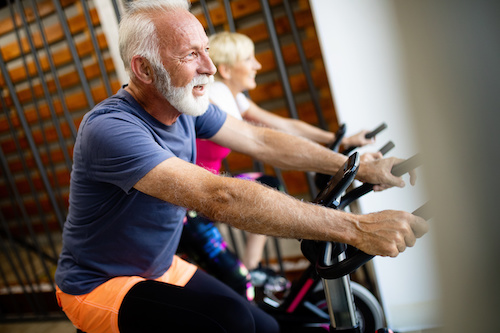 After examining data from more than 14,000, a recent study found that keeping or becoming physically active during middle and older age can lower a person’s risk of death, regardless of existing health conditions.

Investigators from the University of Cambridge found that meeting and maintaining minimum recommended fitness levels, as defined by the World Health Organization (WHO), could potentially prevent 46% of deaths associated with physical inactivity.

Investigators sought to assess the associations of baseline and long-term trajectories of physical activity on all-cause mortality, cardiovascular disease (CVD), and cancer. Using the European Prospective Investigation into Cancer and Nutrition-Norfolk (EPIC-Norfolk) study cohort, investigators identified 14,599 participants between the ages of 40 and 79 for inclusion in the study.

All participants underwent a baseline clinical assessment between 1993 and 1997. Investigators performed a total of 4 follow-up assessments. The first was conducted between 1995 and 1997 with a mean of 1.7 (SD 0.1) years, the second was 3.6 (0.7) years after baseline, and the third follow-up, which was a postal questionnaire was conducted 7.6 (0.9) years after the baseline clinical visit.

Investigators conducted a 2016 follow-up for mortality using data from Office of National Statistics. Investigators confirmed causes of death using ICD-9 and ICD-10 codes. Physical activity was assessed with a questionnaire with a reference time frame of the past year. The first question asked pertained to occupational physical activity and the second question, which was open ended, asked about hours per week spent on cycling, recreational activities, sports, or physical exercise, separately for winter and summer.

A total of 3148 deaths were observed among the study population at the 2016 follow-up. Investigators noted that long-term increases in PAEE were inversely associated with mortality. This association was independent of baseline PAEE.

Additionally, investigators noted that for each 1 kj/kg/day per year increase in PAEE hazard ratios were 0.76 (95% CI, 0.71 to 0.82) for all cause mortality, 0.71 (0.62 to 0.82) for cardiovascular disease mortality, and 0.89 (0.79 - 0.99) for cancer mortality after adjustment for baseline PAEE and risk factors. Investigators observed similar results after the analyses were stratified by medical history of CVD and cancer.

From the findings, investigators theorize that meeting and maintaining minimum physical activity recommendation, as established by the WHO, could prevent 46% of deaths associated with physical activity at the population level.

Investigators point out that, because the study is an observational study, it cannot establish cause. Additionally, the sample was made up by people who were available almost a decade after recruitment, which could have influenced the generalizability of results.

This study, titled “Physical activity trajectories and mortality: population based cohort study,” is published on The BMJ.

Click here to sign up for more MD Magazine content and updates.
Related Coverage >>>
Undiagnosed Obstructive Sleep Apnea an Economic Burden for Older Adults
Adam B. Hill, MD: Improving Public Mental Health Care
FDA Advisory Committee Split on Extended-Release Bupivacaine
You May Also be Interested in
Most Popular
What Literature Says About Pediatric Low Back Pain
Top 10 Painkillers in the US
Weekly Ketamine Infusions Show Initial, Repeated Depression Benefits
Do EMRs Provide Clinically Relevant Information?
Why Do Some People Get HIV After Exposure But Others Don't?