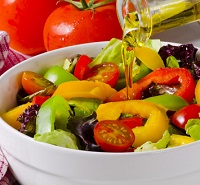 As people age they tend to lose brain volume. But in a study of people in their 70s who followed a Mediterranean-style diet, researchers in Scotland found people who adhered to the diet lost less brain volume.

"This study adds to the body of evidence that suggests the Mediterranean diet has a positive impact on brain health," said study author Michelle Luciano, PhD, of the University of Edinburgh. Writing in Neurology,the researchers said they gathered information on 967 people in Scotland to learn what they ate.

In finding that is contrary to those in other studies, they found no evidence that eating fish vs. red meat directly influenced brain loss or retention.

None of the 562 subjects who continued in the study  had dementia when assessed at about age 70. They had brain scans three years later to measure overall brain volume, gray matter volume and thickness of the cortex.

The researchers then looked to see whether there was any correlation between brain volume and adherence to the diet--one that includes fruits, vegetables, olive oil,beans, wheat and rice with moderate amounts of fish, dairy and wine, and limited red meat and poultry.

People who didn't follow the diet closely were more likely to have a higher loss of total brain volume over the three years than people who followed the diet, they found.

That was true even after the researchers adjusted for possible confounding factors like age, education, high blood pressure, and diabetes.

The study, "Mediterranean-type diet and brain structural change from 73 to 76 years in a Scottish cohort," is publshed online in Neurology.

Click here to sign up for more MD Magazine content and updates.
Related Coverage >>>
Antipsychotic Use Increases Fall Risk for Alzheimer Patients
Ambroxol Shows Potential as a Parkinson Disease Drug
New Schizophrenia Drug Cuts Down on Side Effects
You May Also be Interested in
Most Popular
Brolucizumab Receives FDA Approval for Wet AMD
Top 10 Painkillers in the US
Updated Parkinson Disease Guidelines Available in Canada
Liver Disease More Prevalent in Patients with Crohn's Disease
Plaque Psoriasis: Design and Endpoints of the reSURFACE Trials