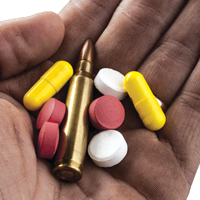 Click here to link to the press release for this article.


Physicians tend to own guns and to have strong opinions on gun control issues.

Last week, MD Magazine asked its readers for their views on curbing gun violence. Of about 1,700 physicians who received the poll, 928 answered the questions and hundreds of these respondents left comments. Among the survey results, more than half of the respondents said they own guns, and about two-thirds said they use the weapons for protection. The physicians polled felt strongly that more gun controls are needed, with over 90% saying that should be in the form of better background checks.

But when asked if physicians should be directly involved in curbing gun violence, more respondents said it was not their job than said it was a health issue in which doctors should play a role. As for organized medicine getting involved, a majority agreed the American Medical Association should not take a stand on gun control.


Do Doctors Play a Role? 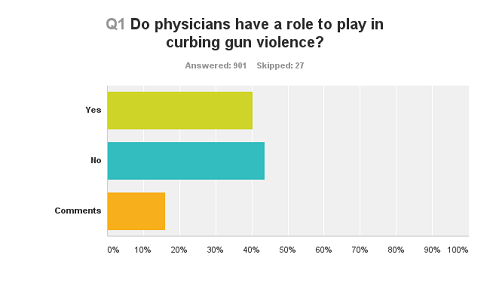 Physicians were split on this question of whether they have a role to play in curbing gun violence. Of 901 who responded, 43.6% said no and 40.3% said yes. More than 16% of those who responded wrote comments, and feelings often ran high.

Of those who said yes:

“Absolutely. We’ve had several children lost to handgun accidents and our practice has had a few suicides by handgun,” said one physician, “Discussions about gun safety go on in my clinic.”

Another expressed doubts that advice or questions would help, but that “possibly physician groups can take a stand together.”

Many said physicians’ role is limited to seeing that patients with mental health problems get care. “Only if they can identify mental instability that may be harmful to the patient or others.” Another said, “Physicians are often the first lie of defense concerning mental health issues, identifying the prospective shooters.” Several called for a stronger mental health care system, better pay for psychiatrists, more leeway in reporting mentally patients to authorities.

Recommending that patients get training in gun safety was mentioned by several who left comments, with some favoring handing out National Rifle Association literature to patients.

Others took a stronger position saying physicians need to get involved.

“We see the aftermath of injuries from guns. We also have a broader responsibility given our Hippocrates oath. The Second Amendment was authored at a very different time when gun slinging in the streets was necessary for personal safety. There is NO need for semi-automatic, military style weapons in the house and there is even less need for laxity on regulations as to who may own them legally. We have to be a part of the conversation to a solution which leads to fewer human wounds and deaths.”

“Physicians have a role in curbing violence, period,” one respondent said, adding that guns in themselves are not the problem.

Of those who said physicians have no role to play in curbing gun violence, some left brief answers. “Absolutely not,” said one, with no further comment.

“There are too many burdens already placed on physicians,” said another.

“Why is this even an issue?” asked one respondent. "The fanaticism about gun control has distorted logical thinking. People have a right to own guns.”

“Many doctors don’t know one end of a firearm from the other and certainly should not be involved in educating their patients.”

The focus should be on the entertainment industry said another, where many blockbuster films feature extremely violent content.

Physicians who said they own guns were adamant that they be allowed to carry them.

“We have the same duty and right to protect ourselves as other citizens,” said one, “Our hospitals/office buildings are perfect targets,” adding that strict gun laws have not stopped shootings in cities like Chicago and Baltimore. “Virtually all mass shootings occur in gun-free zones,” the physician said.

Still others who left comments said their response to gun violence was to “advocate for increased safe gun ownership and concealed carry. That was any potential victims will be armed and able to fight back and quickly terminate any attack,” one wrote.

The Role of the AMA 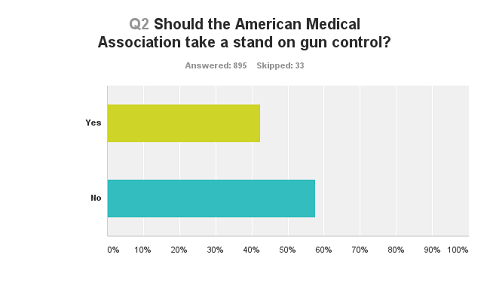 When asked specifically about the AMA, 57.65% said the group shouldn't take a stand on gun control, while 42.35% said yes.

Their comments ranged from a succinct “Hell No!” to more measured responses. “The AMA should not promote further legislation but promote education on safety,” said one respondent. Several took the question as an opportunity to criticize the AMA as not representing most physicians, having no business in politics, and being too “liberal” in general.

“Leave medicine to the physicians and politics to the politicians,” said one.

Others said the AMA should be focused more on improving mental health care.

Of those who answered yes, one said “This is a public health issue [and] we should absolutely be talking about this publicly.”

The AMA should make “A strong statement regarding the fact that gun ownership is a hazard and increases the risk of death in the household,” said another respondent. 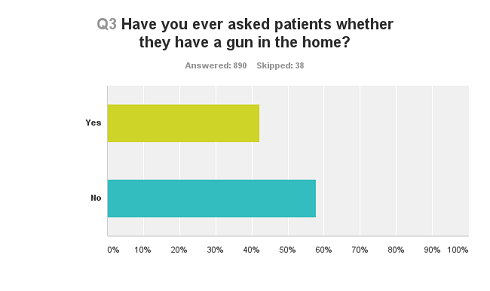 Responses were also mixed when physicians were asked whether or not they ask patients about gun ownership. The issue has become a point of contention as some states have passed laws limiting physicians’ ability to ask about guns and gun safety. The AMA’s House of Delegates voted to oppose such laws last year.

Overall, 42.25% of the 890 respondents said they have asked a patient if they own a gun. While some of the 106 commenters said it was none of their business, many others said they routinely ask in cases when there is a suicide risk or other psychiatric concerns, in some cases, commenters indicated that the question was part of a standard intake form.

Among those who said “no,” the reasons varied.

One said they would only ask if it was important in an individual case: “Why would I go randomly and unnecessarily violate a patient's privacy?”

Others expressed concern about keeping records of gun ownership. “That information, in an EMR, could be mined for inappropriate purposes. And everyone around here has multiple guns.”

One commenter said they agree with laws limiting the asking of gun-related questions by physicians. “I believe it should be a ‘loss of license’ offense to enter any such information into an EMR system.”

Another respondent said no, because “Patient bears responsibility for safe use of firearms.”

Meanwhile, many who answered “yes” cited specific safety concerns, with one saying they don’t ask about gun ownership per se, but rather about where and how a patient stores his or her guns.

“I wanted to ensure that my pediatric patients were not in a home where the (gun) was not locked and stored out of reach,” one respondent said. “This also forced the parents to consider their child's safety with the (gun) in the home.”

Others said the question comes up frequently, “I do it in the list of safety questions including, do you wear a seat belt?”

“I ask women who jog/run alone on the roads what they do for protection including carrying a gun or pepper spray or running with a dog,” said another.

Continue Reading (Page 2) >>
Click here to sign up for more HCPLive® content and updates.
Related Coverage >>>
Christina Tan, MD, MPH: Managing Coronavirus Fear
Novalung System Granted 510(k) Clearance for Whole ECMO System
Bempedoic Acid, A Non-Statin Lipid-Lowering Agent, Approved by FDA
You May Also be Interested in
Most Popular
The Fear of the Coronavirus, and the Reality of the Flu
WHO Prequalifies First Generic Ingredient for Hepatitis C Medicines
Top 10 Painkillers in the US
When to Suspect Diarrhea is Symptom of a Clostridium Difficile
Christina Tan, MD, MPH: Managing Coronavirus Fear