Incarceration Devastating for Kids: How Big Bird Is Helping 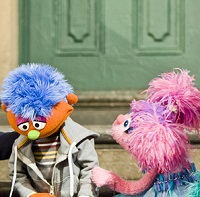 When even Sesame Street's Muppets start trying to help, it's clear something needs to be done.

The problem: there are an estimated five million children in the US who have a parent in jail. The situation can take a catastrophic toll on a child's development.

“Families impacted by criminal justice are some of the most vulnerable families in the country,” said Joyce Arditti, PhD, Professor of Human Development and Family Studies at Virginia Polytechnic. She presented her own qualitative research on the subject.

They noted that the  situation is so pervasive that even Sesame Street is pitching in.  (In photo at left, above, Muppet Alex, whose father is in jail,. is comforted by Muppet Amy. Credit: Gil Vaknin )

"We found there were very few materials out there for children of the incarcerated," said Jeanette Betancourt, EdD, Senior Vice President of US Social Impact at Sesame Workshop, a nonprofit education organization affiliated with Sesame Street in a recent interview following the meeting.

Many of these children "indicated no one had told them why their parent was gone, and the caregivers often thought it was better not to talk about it," she said.

That can result in feelings of "complete isolation," for these kids, Betancourt noted.