Improving Quality of Life in Dementia Patients with Virtual Reality 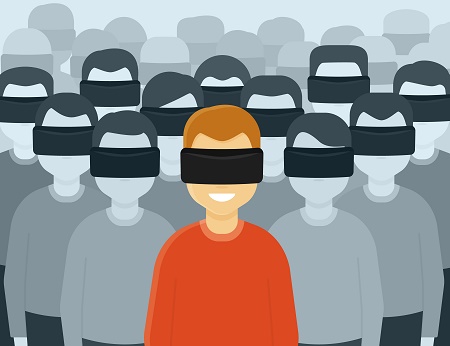 A recent study has found that virtual reality (VR) technology may be an effective way for people with dementia in a locked environment to access experiences beyond their physical setting, to recall past memories, reduce aggression and improve interactions with caregivers.

Researchers from the United Kingdom suggest the technology could vastly improve the quality of life and, if developed properly, can become a personalized tool for the care of patients with dementia.

“VR can clearly have positive benefits for patients with dementia, their families and caregivers. It provides a richer and more satisfying quality of life than is otherwise available, with many positive outcomes,” said Jim Ang, MS, BSc, PhD, study author and senior lecturer at the University of Kent. “With further research, it will be possible to further evaluate the elements of virtual environments that benefit patients and use VR even more effectively.”

Investigators sought to determine the impact of VR on dementia patients within a psychiatric hospital to explore if the technology could have an impact on the patients’ quality of life. The study received ethical approval from the psychiatric hospital and the UK National Health Services (NHS) research committee.

Investigators collected data over a 2-week period from 45 patients with moderate to severe dementia, which included interviews and qualitative and quantitative observations. A researcher observed people with dementia in care as usual for 15 minutes prior to the VR session beginning and would record “pre-exposure” quantitative measures.

Patients were then invited to use VR in a room within the ward and given a menu of virtual environments to choose from. The 5 options available were of a cathedral, a forest, a sandy beach, a rocky beach, and a country scene. Afterwards, patients participated in semi-structured interviews and were returned to care as usual and the researcher observed the patient for 15 minutes after that point to record “post-exposure” quantitative measures.

The caregiver who supported the patient during the intervention also participated in a semi-structured interview.  The same procedure was repeated two week later. The researcher on hand collected measures of Overt Aggression Scale-Modified for Neurorehabilitation and Observed Emotion Rating Scale for the pre-, during, and post- VR exposures. Researchers also made qualitative observations during the sessions, which monitored physical interactions between the patient and the head mounted display.

In all, 8 patients aged between 41 and 88, who were living with dementia including Alzheimer’s and Hungtington’s disease were included within the study for a total of 16 sessions. After analyses, investigators found that VR could impact a patient’s life by not only helping to recall past memories, but reduced aggression and improve interactions with their caregivers.

Investigators found that VR helped patients recall older memories by providing new stimuli that was difficult to achieve, due to ill-health or inaccessibility within their environment. Authors noted that accessing these memories provided patients with positive mental stimulation and allowed their caregivers to learn more and improve their social interaction with patients.

Ang and other authors wrote that additional and larger studies were needed to further validate their findings, but the early indications show the VR has a large potential to improve the quality of life in patients with dementia. Additionally, as technology advances, virtual environments can be specifically designed for individual patients.

This study, “Bring the Outside In: Providing Accessible Experiences Through VR for People with Dementia in Locked Psychiatric Hospitals,” is published in the Proceedings of the SIGCHI Conference on Human Factors in Computing Systems.

Click here to sign up for more HCPLive® content and updates.
Related Coverage >>>
Is an Immediate Annuity for You?
Kenneth Koblan, PhD: SEP-4199 Showing Promise Treating Bipolar Depression
Laparoscopic Ileocecal Resection Comparable to Anti-TNF's for Crohn's Disease
You May Also be Interested in
Most Popular
Denise Daley, PhD: Early Asthma Interventions for Infants
GLP-1 Receptor Agonists and SGLT2 Inhibitors Among the Hottest Advances in the Field of Anti-Hyperglycemia
Acute Kidney Failure Is More Prevalent Among African-Americans
Should Women Age 65 and Older Be on Hormone Therapy?
Guidelines for Exercise After a Tummy Tuck Procedure