How the Military Health System Registry Targets the Opioid Epidemic 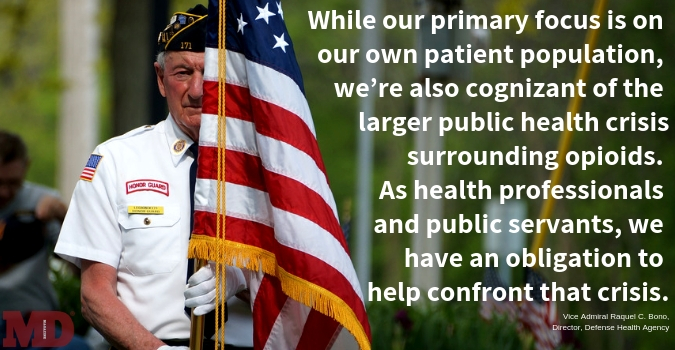 The numbers detailing the opioid epidemic in the US give little hope to the legislative, clinical, and community-based work that seeks to minimalize its effect. Recent estimates report that more than 2.4 million people in the US have an acute opioid-use disorder. The epidemic implicated in an estimated 115 Americans’ deaths from overdoses—daily. Nearly 20,000 people died as a result of an overdose of an opioid pain medication in 2016, non-methadone synthetics-based overdoses excluded. When considering opioid analgesics in addition to heroin and illicit synthetic opioids, that number more than doubles, to 42,249 Americans.[1]

Despite this great reach across various patient populations, one that remains minimally affected by opioid abuse and deadly opioid overdose rates is active-duty military personnel. The rates of deadly opioid overdoses in this population is a quarter of the national average. Vice Admiral Raquel C. Bono, director of the Defense Health Agency, reported that less than 1% of active duty service members are addicted to opioids. This rate persists in spite of the evidence showing the burden of chronic pain on the military population.

“This crisis is touching the lives of so many of our fellow citizens and the department is committed to playing its part to help combat the epidemic and ensure our patients receive the finest care we can provide,” Bono told a House panel in June. “Our beneficiaries are no strangers to chronic pain. While our primary focus is on our own patient population, we’re also cognizant of the larger public health crisis surrounding opioids. As health professionals and public servants, we have an obligation to help confront that crisis.”[2]

Developed in under a year in 2016 and released to all sites in 2017, the Military Health System (MHS) created an Opioid Registry with the objective of reducing the number of opioid prescriptions and therefore potential dependence on these pain medications. The MHS Opioid Registry keeps track of patients who have been prescribed opioids and utilizes a patient look-up tool whereby physicians and pharmacy professionals can manage patients and intervene where necessary. The MHS Opioid Registry tracks more than 200 variables, including opioid risk factors, urinalysis results, medications, and morphine equivalence dose. According to Captain Mike Colston, Director of Mental Health Policy and Oversight for the Office of the Assistant Secretary of Defense for Health Affairs, military prescriptions for opioids have reduced by 15%[3].

The MHS has also developed a Stepped Care Model to guide physicians in reducing opioid prescriptions, by seeking alternatives in effective pain management non-pharmacological solutions while avoiding chronic pain. With increasingly complex cases, the model emphasizes collaboration with other providers in the patient’s care with their primary care manager (PCM). In 2017, the Army began implementing the Comprehensive Pain Management Program (CPMP) to make the necessary modality adaptations and changes within the field of pain medicine, to include physical therapy, interventional medicine, occupational therapy, chiropractic, nutrition, acupuncture, and movement therapy.

When asked about the new programs enacted by the MHS, Rep. Jackie Speier, Ranking Member on the House Armed Services Subcommittee on Military Personnel, expressed her belief that “the military has the opportunity to lead the nation to reduce opioid abuse and develop alternate pain management therapies.”

Military veterans who may seek care outside of military hospitals and clinics and use opioids remain a concern. As service members transition to civilian life, there’s more chance of them falling through the cracks, as policies to reduce opioid prescriptions within the Department of Veteran Affairs (VA) are not necessarily applicable to private sector physicians to whom they may be referred through their health plan, VA Choice.

In a report titled “Opioid Prescribing to High-Risk Veterans Receiving VA Purchased Care,” VA Inspector General Michael Missal reported an overall lack of communication between the VA and civilian physicians regarding choice of pain management therapies. “Veterans receiving opioid prescriptions from VA-referred clinical settings may be at greater risk for overdose and other harm because medication information is not being consistently shared,” VA Inspector General Michael Missal said in a statement. “That has to change. Health-care providers serving veterans should be following consistent guidelines for prescribing opioids and sharing information that ensures quality care for high-risk veterans.”

The National Institute of Health (NIH) has published findings that have shown that veterans are twice as likely to die from an accidental opioid overdose as the general population.

“There has to be a system in place that ensures separating service members who are eligible for VA care and need VA care who have an appointment scheduled before they separate from DoD,” said New Hampshire Rep. Carol Shea-Porter, who serves on the Subcommittee on Military Personnel. “The command responsible for a soldier when he or she is separating [from active duty] should also be held responsible for making sure that soldier is receiving the healthcare they need when separating; many service members are left to navigate that system themselves.”

In “Opioid Prescribing to High-Risk Veterans Receiving VA Purchased Care,” Missal stated that "under VA Choice, prescriptions for veterans who are authorized care through Choice are required to be filled at a VA pharmacy,” but a veteran can choose to fill the prescription outside the VA and pay for the prescriptions out of their own pocket, leading to a lack of monitoring capabilities as in the MHS active duty program. “Patients suffering from chronic pain and mental illness who receive opioid prescriptions from non-VA clinical settings where opioid prescribing and monitoring guidelines conflict with the guidelines in place within VA may be especially at risk,” the report said.

The report noted that access to an up-to-date list of medications and a relevant past medical history is “important for any provider when caring for a patient, but particularly with high-risk veterans such as those with chronic pain and mental health illness.” That said, this information is not consistently present in the documentation of purchased care through the VA’s choice program, according to the report.

The report made a recommendation to the VA that, until a common electronic medical record system can be implemented, VA physicians should ensure that all referrals to civilian physicians include a list of the medications and medical history of the patient, and that all opioid prescriptions be submitted directly to VA pharmacies for the purpose of maintaining records.