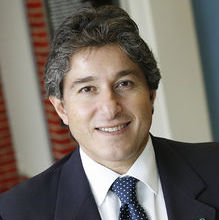 Antonio Giordano, MD, PhD
The pathogenesis of conditions of the eye such as age-related macular degeneration (AMD) could be impacted by gender-based differences in hormone fluctuations.

Newly published data from a team of investigators from Temple University’s Sbarro Institute has found that variations in sex steroid homeostasis have an effect on the physiology of human male retinal-pigment epithelial cells (RPEs), which are impacted by the inflammation caused by AMD.

According to the authors, the data from this study show high clinical significance as it considers these steroid fluctuations as the prompters of locale changes in the retina. These changes then are able to impact the pathological situation that occur along with aging in the non-reproductive systems—like the eye.

“The main goal of our investigation was to define whether male gender can be considered a risk factor in developing age-related retinal disease including AMD,” Antonio Giordano, MD, PhD, the director of the Sbarro Institute at Temple University, and lead author, told MD Magazine. “Estrogens have historically been associated with women’s physiology, however, over the last 2 decades, several studies have shown that these hormones play a fundamental role in men.”

The pathogenesis of AMD is still not understood despite intense clinical research, although there has been a link, while controversial, found between AMD and gender—more specifically, the effects on RPEs when exposed habitually to estradiol, a reproductive hormone which aids in treating the symptoms caused by menopause, and progesterone, often used to aid in the treatment of uterine changes for post-menopausal women.

“To mimic sex steroid hormone fluctuations occurring with aging, we exposed retinal pigment epithelial cells, ARPE-19, to acute, prolonged or chronic estradiol and progesterone challenges,” Carlo Astarita, PhD, from the University of Siena and a researcher at Temple, as well as coauthor of the study, said in a statement.

Astarita noted that the researchers found that chronic estradiol treatment resulted in RPE cell death via necrosis, occurring due to mechanisms involving the subcellular localization of the retinoblastoma-related protein pRb2/p130 and the extracellular plasminogen activator inhibitor type-2 (PAI-2).

Conversely, the study revealed that chronic exposure to progesterone caused the nuclear subcellular rearrangement and co-immunolocalization of pRb2/p130 with PAI-2. Additionally, it induced the accumulation of cells in the G2/M phase, and a subsequent reduction in necrosis and a surge in apoptosis.

“Today, the mechanisms governing the action of sex steroid hormones in maintaining the health of the eye are still largely unknown and our investigation offers the unique opportunity to unravel the effects of sex hormones,” Mina Massaro-Giordano, MD, a co-author of the study and professor of Ophthalmology at the Hospital of the University of Pennsylvania, said. “Not only in determining gender differences, but also in affecting the physiology of non-reproductive systems, such as the eye.”

“The biology underlying gender-related circumstances should be considered by the clinicians involved in the treatment of eye conditions such as AMD,” Giordano added.

The study’s findings had implication for the transgender community as well, a community that Giordano referred to as “underserved.”

The study received funding in part from a grant from the Ken and Ann Douglas Charitable Foundation and the Sbarro Health Research Organization (SHRO).

The study, “Effect of sex steroid hormone fluctuations in the pathophysiology of male- retinal pigment epithelial cells,” was published in the Journal of Cellular Physiology.

Click here to sign up for more HCPLive® content and updates.
Related Coverage >>>
Strabismus in Children Associated With Lower Quality of Life
Coronavirus and Ophthalmology Best Practices with Rishi Singh, MD
Vision Problems More Common in Patients with Parkinson Disease
You May Also be Interested in
Most Popular
Gastrointestinal Issues Could Help Diagnose Coronavirus
Comparing RT-PCR and Chest CT for Diagnosing COVID-19
Flu Cases Near 30 Million in the US, CDC Reports
Fracture Location Related to Increased Mortality
Concern Over Sleep Apnea and Coronavirus Transmission