HIV Treatment Could Be to Blame for More Syphilis Cases 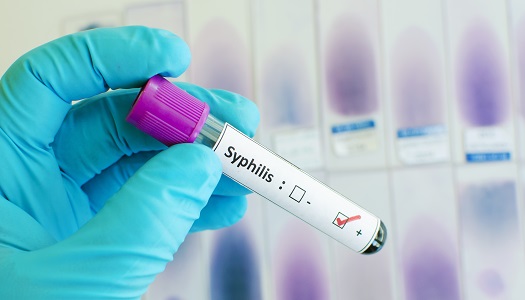 While sophisticated and life-saving, highly active antiretroviral therapy (HAART) to fight the human immunodeficiency virus (HIV) could be contributing to the increasing rate of another sexually transmitted disease (STD), according to researchers from The University of British Columbia (UBC).

HIV treatment, called antiretroviral therapy (ART), is considered HAART when at least three drugs are used to roadblock virus replication—which is the standard treatment, says the World Health Organization (WHO). However, the study suggests that HAART hurts the body’s immune responses. Lead author, Michael Rekart, MD, and colleagues examined how the drugs could be impacting the number of syphilis cases—one of the three STDs dominating diagnoses in the United States.

“After reading about the astounding increase in syphilis cases, I also noticed a huge gap between syphilis and other sexually transmitted infections like chlamydia and gonorrhea,” Rekart, a clinical professor in UBC’s School of Population and Public Health, said in a news release. This suspicion led him to look into correlation between HIV and syphilis.

Syphilis outbreaks have also been on the rise in various parts of the US, Canada, Western Europe, and China over the past few years, and it’s been believed that risky sexual behavior was the culprit. However, the researchers found two key insights—1) Many men don’t practice risky sexual behavior; 2) Syphilis is often found in people on HAART.

Since men who have sex with men (MSM) make up most syphilis cases, the UBC researchers looked at that population in Buenos Aires, Argentina and hypothesized that HAART hurts immune responses to the bacterium that causes syphilis, Treponema pallidum (T. pallidum). Using a novel mathematical model, they assessed the prevalence of HAART-induced changes, considering both behavior and biological effects.

“Although limited by the lack of treponemal antibody confirmatory testing, they detected 171 new cases of syphilis during the study period, translating to an incidence of 14.9/100 patients/year,” researchers from Johns Hopkins University School of Medicine commented on the study in an editorial.

But does this research suggest that there needs to be a change in how physicians treat HIV? Not at all.

“HAART drugs are life-saving; syphilis is curable,” Rekart continued. “HAART drugs bring people with HIV back to a normal state of immunity, they can have a normal life, they don’t get most opportunistic infections such as tuberculosis.”

The UBC team plans to compare data on people with syphilis who are on HAART and not on HAART. In addition, they want to find if specific HAART cocktails impact immune responses better or worse than others.

The study, “A double-edged sword: does highly active antiretroviral therapy contribute to syphilis incidence by impairing immunity to Treponema pallidum,” and editorial, “Syphilis and HIV: Is HAART at the heart of this epidemic,” were published in the journal Sexually Transmitted Infections. The news release was provided by The University of British Columbia.

Related Coverage:
Researchers Challenge CDC’s HIV Prevention Guidelines
Certain Genital Bacteria Trigger Risk of HIV
Why Do Some People Get HIV After Exposure But Others Don’t?

Click here to sign up for more HCPLive® content and updates.
Related Coverage >>>
How Will COVID-19 Change Pediatric Care?
Brian LaMoreaux, MD: Practicing Rheumatology During and After COVID-19
COVID-19 Lockdown Having an Impact on Adolescent Mental Health
You May Also be Interested in
Most Popular
Positive Results Treating Active Psoriatic Arthritis with Upadacitinib
How COVID-19 Affects Children and Pediatric Care
Adverse Effects of Hydroxychloroquine, Chloroquine, and Azithromycin
Higher Doses of Upadacitinib Increase Rate of Serious Infections
Tonsil Removal Surgery Could Have Negative Impact on Patient Immune System