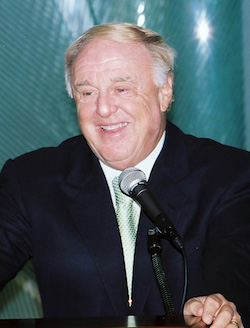 New research from The Scripps Research Institute (TSRI) could make it possible to alter HIV-fighting antibodies to become immune cells. The scientists did just that in a lab and were able to create cells that are resistant to the virus long-term.

“This research is possible because of the ability to select specialized antibodies from combinatorial antibody libraries,” Richard Lerner, MD, (photo) Lita Annenberg Hazen Professor of Immunochemistry, said in a news release.

The team first used rhinovirus, the most common virus to cause the common cold, to test their system. Lentivirus, a vector, was used to deliver a new gene to cultured human cells. The gene synthesized the antibodies which bind to ICAM-1, a human cell receptor that rhinovirus needs. Since the antibodies were using the site, rhinovirus was unable to enter the cell and spread the virus.

Jia Xie, senior staff scientist at TSRI, explained that this “neighbor effect” is more effective because the antibody was nearby as opposed to floating through the bloodstream. “You don’t need to have so many molecules on one cell to be effective,” Xie said.

The researchers noted that their system can’t reach 100% of cells so both engineered and unengineered cells were used. When rhinovirus was added to those cells, the vast majority died in about two days. The population never recovered when the virus was only in the company of unengineered cells. When the rhinovirus was among a mix of both types of cell, there was an initial die-off but quick bounce back. The cell populations were at similar levels as the undiseased control group after 125 hours.

Positive results were also found using HIV; the resistant cells were able to replace infected cells, and quickly. Using antibodies that could potentially protect the CD4 cell receptor, where HIV binds to infect a person, the team found that the technique worked again.

The technique differs from others in a way that provides “a significant advantage,” according to the team, and could potentially cure HIV. In other therapies, antibodies float freely in the bloodstream at a relatively low concentration; the new technique has the antibodies hanging from a cell’s surface, which blocks viruses from invading cell receptors and spreading the infection.

Lerner described the system as “a form of cellular vaccination.”

The TSRI team is planning to work with City of Hope’s Center for Gene Therapy in order to analyze the therapy’s efficacy and safety profiles. City of Hope already has clinical trials in motion to test gene therapy for AIDS through blood stem cell transplantation.

“The ultimate goal will be the control of HIV in patients with AIDS without the need for other medications,” said John A. Zaia, MD, director of the Center for Gene Therapy in the Hematological Malignancy and Stem Cell Transplantation Institute at City of Hope.

The study, “Immunochemical engineering of cell surfaces to generate virus resistance,” was published in the Proceedings of the National Academy of Sciences of the United States of America (PNAS). The news release and photo were provided by TSRI.

Click here to sign up for more HCPLive® content and updates.
Related Coverage >>>
Insufficient Data to Accurately Monitor Most At-Risk Communities for Flu
Baloxavir Effective in Preventing Spread of Flu
Banafsheh Kashani, MD: Telemedicine for Women's Health During COVID-19
You May Also be Interested in
Most Popular
Denise Daley, PhD: Early Asthma Interventions for Infants
Picking up the Pace: Progress on Artificial Kidney
Physicians and Patients Need to Discuss the Benefits of Clinical Trials
Visual Impairment, Dementia Are Detrimental to Independence of Older Adults
When to Suspect Diarrhea is Symptom of a Clostridium Difficile