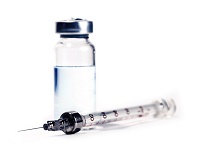 Injections given as an alternative medical treatment known as "prolotherapy" or "regenerative injection therapy" spread hepatitis C among at least seven patients of 400 who were potentially exposed. All were treated at a clinic in Santa Barbara, CA, the US Centers for Disease Control and Prevention reported.


Investigators said that the clinic was using a single syringe for multiple injections.

The injections, which consist of a variety of substances sometimes including platelet-rich plasma, are meant to treat chronic pain. This therapy is becoming more popular, the CDC said.

The donor had no known risk factors such as intravenous drug use so authorities investigated.

The California Department of Public Health and the CDC determined that the donor was getting injections at a pain clinic and that its workers had poor infection control practices.
They shut down the clinic when they found that infection control had not improved by a second visit,.

Reporting in the current issue of Morbidity and Mortality Weekly Review, the authors said these poor practices may also have exposed all 400 clinic patients to hepatitis B virus and HIV.

The lesson to be learned is that “Identification of a case of acute HCV infection in a frequent blood donor without other risk factors should be considered a sentinel event” wrote Monique A. Foster, MD for colleagues in “Investigation of Hepatitis C Virus Transmission Associated with Injection Therapy for Chonic Pain- California, 2015."

They also suggested that while hospital workers are usually adequately educated on infection control, "all health-care settings, including complementary medical settings where injections occur, should follow guidelines for safe injection practices."

Foster also noted that there are no formal practice guidelines for administering the therapy, nor is any special training required.

Click here to sign up for more MD Magazine content and updates.
Related Coverage >>>
Investigators Link Farm Proximity Residence to C. Difficile
The 10 Most Read Articles of 2019
HCV-Positive Hearts Could Increase Donor Pools
You May Also be Interested in
Most Popular
Top 10 Podcasts for Primary Care Physicians
How to Spot a Bad Doctor
DocTalk Podcast: Dangers of Vaping with Dr. Rizzo
Testing Long-Term Rituximab Use in a Multiple Sclerosis Clinic
How a Cruise Can Simplify Your Vacation