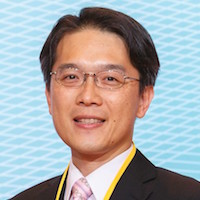 Tung-Hung Su, MD, PhD
A large Asian population study supported an association between hepatitis C virus (HCV) infection and Parkinsonism in that region, and found that treating HCV reduced the risk of Parkinsonism.

In findings presented at the 2018 American Association for the Study of Liver Diseases (AASLD; The Liver Meeting) in San Francisco, Tung-Hung Su, MD, PhD, of the Department of Internal Medicine at the National Taiwan University Hospital and National Taiwan University College of Medicine, and colleagues aimed to investigate the oft-controversially discussed link between HCV and Parkinsonism, as well as the effects of antiviral therapy.

The putative association between HCV and Parkinsonism reported in Asian countries has not been found in Western populations. In their study with a large US Medicare database, Zobair Younossi, MD, MPH, and colleagues found no association between the 2 conditions.

The disparate findings notwithstanding, Younossi and colleagues do suggest possible mechanisms for the association, as well as possible reasons for the apparent regional differences. They poined out that HCV is a neurotropic virus and can replicate in the central nervous system, and that some neurotropic viruses such as influenza and coxsackie have been associated with acute and chronic Parkinsonism.

They also consider that differences between population demographics, in the prevalence of HCV, and in the prevalent genotypes could have factored into the different findings.

Su concurred with Younossi on some of the possible reasons for the different findings, in comments to MD Magazine®, including the different HCV genotypes and lower prevalence of HCV infection in the US population.

They then matched approximately 23,000 patients with untreated HCV to an HCV population that had been treated with pegylated interferon and ribavirin (PegIFN/RBV). Patients receiving the antiviral therapy had a significantly lower (38%) risk of developing Parkinsonism (adjusted HR: 0.618; 95% CI 0.498-0.765), and a reduced risk of Parkinsonism requiring medication (adjusted HR: 0.651; 95% CI: 0.515-0.823).

Su discussed that putative mechanism with MD Mag, indicating that he finds the data to be equivocal. "These events are rare compared with the large number of interferon therapies, transient, and sometimes the symptoms subsided after interferon discontinuation," Su observed.

In the largest reported series, Su points out that the risk of Parkinsonism in interferon-treated patients was approximately one-third of that for those with untreated HCV. Though he acknowledged that duration and interferon type were not specified, and that time-dependent analyses were not applied, he confirmed the results still suggested a protective effect of interferon against Parkinsonism development.

"Our study demonstrates the positive association between HCV infection and Parkinsonism," Su emphasized. "Our findings highlight the need for periodical neurological evaluation in patients with chronic hepatitis C for early detection of Parkinsonism."

The study, "Antiviral Therapy is Associated with Reduced Risk of Parkinsonism in Patients with Chronic Hepatitis C," was presented as at the The Liver Meeting 2018.

Click here to sign up for more MD Magazine content and updates.
Related Coverage >>>
Post-Stroke Health Better Among Young Minority Patients Than White Patients
Flu Cases Reach 13 Million in the US, CDC Reports
Antipsychotic Use Increases Fall Risk for Alzheimer Patients
You May Also be Interested in
Most Popular
The Birth of a New Decade: Will We Finally Improve Maternal Care in the US?
Unusual Case of Large Infarcted Lactating Adenoma
Top 10 Painkillers in the US
Minorities Disproportionately Cared for in ICU
Ofri Mosenzon, MD: Dapagliflozin Impact on Renal Outcomes