Hepatitis B Vaccine Recommended for Infants Within 24 Hours of Birth 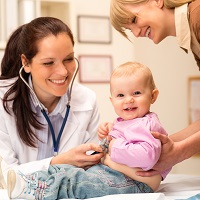 Healthy newborns should be given their first hepatitis B (HBV) vaccination within 24 hours of birth, according to new guidelines from the American Academy of Pediatrics (AAP).

The birth dose of hepatitis B vaccine is a “critical safety net” for infants born to undiagnosed hepatitis B-infected mothers at the time of birth, according to the AAP, a child health advocacy group with 66,000 pediatrician members.

Chronic HBV infection occurs in as many as 90% of infants infected with HBV at birth or in the first year of life, and about 25% of these infants ultimately will die of hepatocellular carcinoma or liver cirrhosis if untreated, according to the AAP’s updated policy statement from last month.

Previous vaccine recommendations contained “permissive language” that allowed practitioners to delay the birth dose, according to the statement. But by 2014, only 72% of infants received the vaccine at the time of birth.

The US Centers for Disease Control’s Advisory Committee on Immunization Practices rescinded the lenient language in 2016. Instead of giving practitioners leeway, the committee clearly stated that the first HBV vaccination should be administered within 24 hours of birth to all medically stable infants who weigh at least 4.41 lbs.

The vaccine is 75% to 95% effective in preventing perinatal hepatitis B transmission when given within 24 hours of birth, according to the policy statement.

"It is important that no newborn leaves the birth hospital without it,” Flor Munoz, MD, FAAP, policy co-author, said.

After completing the full 3- to 4-dose hepatitis B vaccine series, 98% of healthy infants achieve full immunity to the virus, according to the AAP. The vaccine is also well-tolerated in infants.

Worldwide, new infections of HBV are falling, thanks to increased vaccination among children. Globally, 84% of babies born in 2015 received the 3 recommended HBV doses, according to the World Health Organization. The proportion of children under 5 years old with new infections fell from 4.7% in the pre-vaccine era of the 1980s to early 2000s, to 1.3% in 2015.

However, an estimated 257 million people, mostly adults born before the introduction of the vaccine, were living with chronic HBV in 2015.

In the US, the HBV vaccine has been available since 1982, leading to a 90% reduction in new infections. However, about 1,000 new cases of perinatal hepatitis B infection are still identified annually, according to the AAP.

“The HBV vaccine is very effective in preventing mother to child transmission. Anti-viral treatment is very effective in reducing viral load and person to person transmission,” said Homie Razavi, PhD, MBA and Managing Director of the CDA Foundation, which studies complex diseases. “Yet we still have a high infection rate. This represents a failure of the global health institutions.”

The US opioid epidemic has increased new hepatitis B infections in some states. This crisis underscores the urgency of improving perinatal prevention strategies, the AAP said.

The US Department of Health and Human Services has set a goal of zero perinatal HBV transmission in the country by 2020.

To help reach that milestone, the AAP recommends that pregnant women who test positive for HBV be identified and treated before delivery. In addition, the HBV vaccine should be given to babies who are born weighing less than 4.41 lbs when they leave the hospital or at 1 month of age. Infants born to HBV-positive mothers should get the first doses of both the HBV vaccine and hepatitis B immunoglobulin at birth, regardless of the baby’s weight or co-morbidities.

A copy of the policy statement was made available by the American Academy of Pediatrics.

A press release regarding the policy was made available.