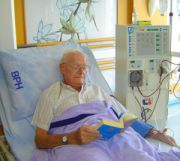 Although hemodialysis is a commonly used treatment for kidney failure, a recent study has shown it may not be as beneficial for people who develop a sudden case of the condition.

A study published in PLOS One by a team from the University of Pittsburgh Medical Center showed that for some patients the common treatment could do more harm than good.

Looking at records of more than 2 million patients who were admitted to hospitals in Pennsylvania between October of 2005 and December of 2007, the team saw patients with various levels of kidney failure and renal disease. Out of that group, 6,657 patients received acute hemodialysis and one year after treatment those patients had “nearly twice the risk of death” as others who did not undergo the procedure.

“The most striking finding is the increased mortality risk for patients who received acute hemodialysis, even after risk adjustment which limited the sample to the sickest patients,” noted lead author
Sarah Ramer, MD. Ramer currently works at Rutgers New Jersey Medical School but conducted research for the study while working in the Pittsburgh Clinical Scientist Training Program.

“We know that there is variation in how doctors decide if and when to dialyze a hospitalized patient,” she added. “If patients given acute hemodialysis are not carefully chosen, some patients might end up not being helped by the treatment.”

Barnato said that while the study was based on observations rather than clinical data, the results they saw still raised questions about what is in the patient’s best interests. “I do wonder whether it is time to do a clinical trial on the timing and delivery of acute hemodialysis in the context of acute renal failure and critical illness.”

Funding for the study was provided by a Doris Duke Clinical Research Fellowship and a grant from the National Institutes of Health.