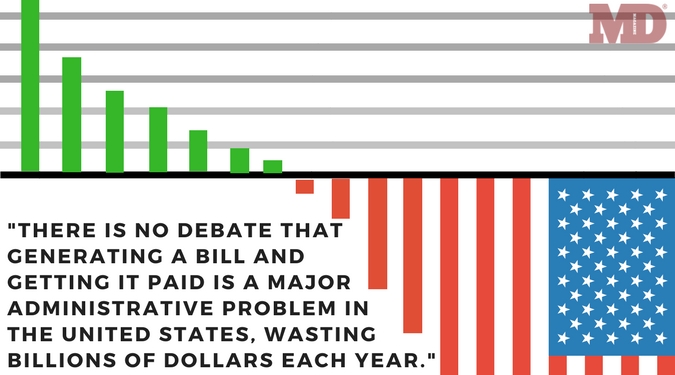 Kevin Schulman, MD, took his daughter to a clinic to get her ear infection checked out. The professor of medicine at Duke University and associate director of the Duke Clinical Research Institute wasn’t wearing his white coat for this visit—he was just doing his fatherly duties. The attending nurse soon joined them and began her examination with the typical round of background questions, reading each from a computer screen. As she droned through the points, Schulman’s inner-doctor—the one obsessed with efficiency and proper patient care—began to fidget.

The nurse’s questions probed into the granular details of Schulman’s family history of disease. It made him wonder: Would the answers really help provide improved outcomes for his daughter’s ear infection? Or would they sit idly in some digital purgatory? How much time and money was really being allocated to the point-by-point completion of this electronic form, and who stood to benefit?

Schulman’s frustration from that exam—a simple doctor’s visit turned into a parlor game of questions at the behest of some insurer, probably a thousand miles away—drove him to seek answers. He already knew why health systems followed procedures to comply with billing and insurance requirements. And he knew these practices were a major time-suck for everyone involved. But exactly how bad was it?

In a study published last month, Schulman and colleagues from Duke and Harvard Business School reported that the costs to complete billing and insurance-related activities through an electronic health record (EHR) at an academic health care system could range anywhere from $20 to $215 per visit or procedure. The time allocated to these activities also varies widely, from 13 minutes at the low end, up to about 2 hours.

“These are non-valuated costs, and the patients are paying for it,” Schulman told MD Magazine. “Nobody understands it—this just happens. This isn’t even dealing with the costs of coverage.”

The US healthcare system is bleeding money annually, with worsening health metrics amplifying the severity. The country doesn’t just spend more on health care than any other world power; it resides in an expense bracket unfeasibly out of reach from the next-richest country. The conversation around the issue is equally massive. But it wasn’t until recently that researchers like Schulman began to narrow it, for the sake of moving toward real solutions.

Ashish K. Jha, MD, MPH, was adamant that his own research was wrong. The director of Harvard Global Health Institute was compiling national and foreign data on the world’s richest countries, which he planned to use to compare the United States’ healthcare spending to 10 countries of comparable size and demographic makeups. Jha and his team were looking for jumping-off points—foundational facts they could use to design improved health care models.

Many of the results Jha’s team found were anticipated: the US spent 17% of its gross domestic product on healthcare in 2016, nearly twice that of the 11 succeeding countries’ average mean expenses (11.5%). But despite its superlative spending, the US reported the greatest rate of obesity, the worst infant mortality rate per 1000 people, the lowest percentage of the population with healthcare coverage, and the lowest mean life expectancy.

How could that be? The US did not significantly differ from the other countries in physician workforce (2.6 physicians per 1000 people), nor rate of primary care physicians (43%). The money was being siphoned somewhere—somewhere Jha couldn’t pinpoint.

Not wanting to give up, he dug deeper. Soon, he nailed down the biggest culprits: patient costs and administrative expenses. Physician salaries make up a large slice of the pie too. On average, a primary care physician in the US makes $218,173, while the 10 compared countries’ physician salaries ranged from $86,607 to $154,126. Jha argued that this gap was easier to understand—US physicians pay their own way through more costly medical schools, work longer hours, and take on a larger burden of responsibilities.

Still, “a privately insured person in Kansas probably pays twice as much for an MRI than the person with private insurance in Geneva, Switzerland does,” he said. “And Geneva is one of most expensive cities in the world — a cappuccino from Starbucks costs about $9.”

Administrative costs for care, defined as the planning, regulation, and management of health systems and services, accounted for 8% of the US GDP in 2016, or $250 billion — a number further amplified by the fact that similarly wealthy countries allocate a mean of just 3% to their administration expenses.

In an accompanying essay to Jha’s study, Ezekiel J. Emanuel, MD, PhD, noted that Sweden comes closest to the US in healthcare expenses per capita, but pales by 453% in administration costs per capita: $136 to the US’ $752.

“There is no debate that generating a bill and getting it paid is a major administrative problem in the United States, wasting billions of dollars each year,” Emanuel said. “This too is more than just a price difference.”

“Management would hammer people on being over budget every quarter,” Newton said. “The clients that are truly trying to manage [the problem] and get in front of it have a different perspective on the analytics, and can now control it better.”

From his perspective, every healthcare organization could cut up to 2% of their personnel spending without harm. Newton’s diagnosis points to consistent flaws in overtime costs, time utilization, and what he calls “time inflation”—when clinicians who work irregular hours are paid for hours they didn’t actually work.

These issues are symptomatic of unwieldy healthcare organization structures, and not of clinicians who attempt to “game the system,” Newton said. So he seeks out the gaps of information between his on-paper analysis and what’s actually happening in exam rooms.  “That difference is often part of our remediation,” Newton said, “and it often calls for automation.”

For better or worse, automation is the end-goal for health care administrations. It led the migration to EHRs years ago, because the switch to digital data-logging would ostensibly reduce physician burden and billing system costs.

“One of the things we kept hearing from administrative staff was that EHR would auto-populate systems,” Schulman said. “Yet administration costs still remain really high.”

Schulman and his team found that billing inefficiencies are not as obvious as they’re often perceived to be. Insurers institute systems that vary widely in standards and practices, often beyond the current automating capabilities of EHRs. Now, the nationwide investment into electronic systems has only become another excessive expense. The full allocation of EHRs to billing activities “significantly increased” billing costs from base-case estimates, Schulman’s study reported, the opposite of their intended effect.

“Although the EHR system can automatically generate bills for clinical visits, these systems require the time of high-cost physicians to perform coding and documentation activities that are unrelated to clinical services,” researchers wrote. “In addition, the process maps revealed that despite the electronic system, the billing process still required multiple steps by many types of personnel.”

If EHRs cannot automate administrative tasks, Schulman said physicians need to begin lobbying for something that will: a standardized payment process across all insurers. “I don’t think the clinician community has been consistent in making arguments against [the current systems],” he said. “Non-valuated paperwork is not why you go to medical school.”

Schulman argues that a big change doesn’t necessarily include a single-payer system —multiple European countries practice a multi-payer system “without this baggage,” he noted. Indeed, in Jha’s study, multi-payer systems in countries such as Germany (5%), the Netherlands (4%), and Switzerland (4%) reported allocation to health care administration that were above the observed average in 2016. But these rates are still substantially less than those in the US.

His proposed resolution focuses on a bigger fiscal issue: lowering prices through increased competition. The last decade has seen a major movement towards health care consolidation, which in some ways has been encouraged by the Affordable Care Act, and in many ways has not been beneficial to physicians and patients. With less competition, there have been fewer tools to help curtail rising treatment prices — plus, there’s a paucity of clinical proof of the benefits of consolidation.

“Promoting competition should be like mom and apple pie,” Jha said. “Whether you’re a Democratic or Republican, that should be something easy to get behind.”

Jha’s and Schulman’s analysis is foundational, because that’s what the system needs—a strong foundation. The flaws of the US health care system are frequently harped, but rarely defined. Even Jha, a clinician who’s tapped into national research for decades, struggled to accept that some of his long-held conceptions were false.

“The most important part of this work is just putting out facts we can begin conversations with,” Jha said. “There’s a lot here to unpack, and it’s hard to have discussions unless we agree on what the facts are. If we can begin there, the conversation should be much more productive.”

Newton said it’s still just the tip of the iceberg. Emerging cost analysis products are shifting from labor-oriented to patient outcome-specific, which would eventually give physicians leverage to improve prescription- and treatment-based costs. Combined with continued digitization efforts, the industry is beginning to embrace cost-improving measures— if only 2 or 3 years later than most other fields, Newton said.

Until payment systems are standardized and public agencies embrace more price competition, patients will continue to foot hefty bills and physicians will still be tasked with covering a system oozing with excess.

Longer ear infection exams are just the start of it.