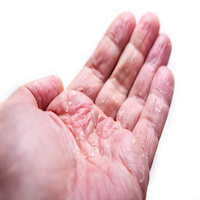 New longer-term data from the open-label extension of the VOYAGE 1 guselkumab (Tremfya) trial demonstrates consistent rates of skin clearance among patients with moderate to severe plaque psoriasis, presented by Janseen Research and Development.

“These data show the rates of skin clearance with guselkumab were consistent at weeks 52 and 100 with every 8-week maintenance therapy,” said Chris Griffiths, found professor of dermatology, University of Manchester, VOYAGE 1 study steering committee member. “These important new findings contribute to the scientific evidence for targeting IL-23 in the treatment of moderate to severe plaque psoriasis.”

The phase 3, randomized, double-blind, placebo and active comparator-controlled trial was designed to evaluate the efficacy and safety of Tremfya compared with the placebo and adalimumab (Humira) in adults with moderate to severe plaque psoriasis.

The longer-term findings from the phase 3 VOYAGE 1 study were presented at the 26th European Academy of Dermatology and Venerology (EADV) Congress. Results showed that more than 80% of patients receiving Tremfya, including those initially treated with a placebo or the anti-tumor necrosis factor (TNF)-alpha agent Humira, achieved at least 90% improvement in the Psoriasis Area Severity Index (PASI 90) or near complete skin clearance, and an Investigator’s Global Assessment (IGA) score of cleared (0) or minimal disease (1) at week 100.

Results from the open-label extension of the study showed that at week 100, 82.4% of patients initially randomized to Tremfya achieved an IGA score of 0/1 (cleared of minimal disease) and 82.1% achieved a PASI 90 score, near skin clearance.

Results among patients initially randomized to placebo and crossed over to Tremfya at weeks 16 and 20 demonstrated consistent levels of skin clearance at weeks 52 and 100.

Over the 2-year Tremfya treatment period, scores from the Psoriasis Symptoms and Signs Diary (PSSD) were consistent.

In VOYAGE 1, patients initially randomized to receive Humira and crossed over to Tremfya demonstrated substantial improvement in PSSD scores from week 48 to week 100. The proportion of patients reporting PSSD symptom scores of 0 improved from 23.1% at week 48, during Humira treatment, to 41.8% percent at week 100 during Tremfya treatment.

No cases of tuberculosis, opportunistic infections or serious hypersensitivity reactions were reported.

VOYAGE 1 is part of a comprehensive Tremfya phase 3 clinical development program along with 2 additional phase 3 trials: VOYAGE 2 and NAVIGATE.

A press release was made available.

Click here to sign up for more MD Magazine content and updates.
Related Coverage >>>
Osteoarthritis Guideline Updates Emphasize Shared Treatment Decision-Making
What Women with Rheumatoid Arthritis Can Do to Have Healthy Pregnancies
The 10 Most Read Articles of 2019
You May Also be Interested in
Most Popular
Top 10 Painkillers in the US
Flu Cases Reach 13 Million in the US, CDC Reports
Processed Meat Associated with Greater COPD Risk
When Patients Give
Top 10 Podcasts for Primary Care Physicians