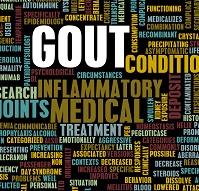 Brazilian researchers who surveyed rheumatologists on their methods for treating gout found not all were following the American College of Rheumatology’s guidelines. Gout is on the rise and well understood. “Despite the existence of this knowledge, gout is often poorly managed,” wrote lead author Ana Beatriz Vargas-Santos, PhD, of the Universidad do Estado do Rio de Janeiro, Brazil in August’s PloS One.  The survey was the first to attempt to reach a representative sample of all the rheumatologists in Brazil.

The study describes current pharmacological gout treatment from a cross-section of Brazilian Society of Rheumatology (BSR) members. More than 78% of the 395 BSR members contacted responded. The sample was randomly selected and stratified for proportional representation. The researchers asked about treatment regimens, demographics, training and experience, practice settings and patients. Most respondents reported using a corticosteroid and colchicine to treat acute gout attacks, including monoarticular (single joint) ones.

In keeping with the ACR guidelines, more than 90% of respondents said they always or almost always prescribe a prophylactic treatment when starting urate lowering therapy (ULT).

“We identified that a significant proportion of rheumatologists indicated, once at least, the use of treatment modalities that are recommended not to be used,” they noted. Those including using high-dose colchicine (10%), and starting colchicine monotherapy more than 36 hours after the onset of the attack (20.1%).

They typically began colchicine monotherapy after 36 hours of attack onset and withdrew ULT therapy by about one-third during acute attack.

Almost all respondents used anti-inflammatory prophylaxis at ULT onset with most (70 percent) targeting a serum uric acid level at less than 6 mg/dl. Half started allopurinol doses at 100 mg daily or less; 42 percent at 300 mg daily among patients with normal renal function. Seventy-six percent maintained ULT of gout patients with tophi vs. nearly 40 percent without tophi.

Since rheumatologists are opinion leaders in this disease, a program for improving quality of care for gout patients should focus on increasing their knowledge of this common disease,” the researchers concluded.