From Phase 1 to FDA Approval: Following a Drug Through the Development Pipeline 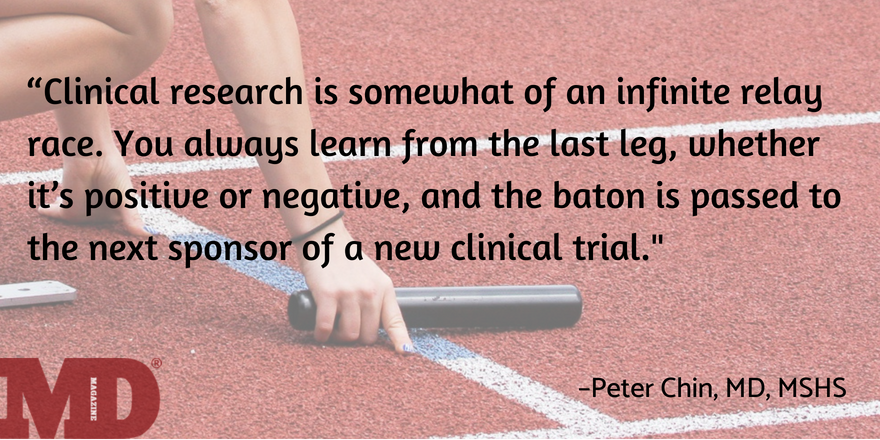 The room full of researchers and doctors erupted in applause around Peter Chin as positive results from the phase 3 trial of ocrelizumab were announced. After over a decade of hard, uncertain work on the multiple sclerosis drug, the team celebrated their success. “Some people were crying and others were cheering,” he recalled, “because you realize when you see those results that you contributed to something that may make a difference in people’s lives.”

Ocrelizumab went on to become the first therapy for primary progressive multiple sclerosis ever approved by the US Food and Drug Administration a couple years after this celebration. However, that achievement followed nearly 2 decades of preclinical research, clinical trials, and regulatory review, the arduous path that all new drugs and biologics must take before they reach the physicians who prescribe them.

Before the US Food and Drug Administration (FDA) approves products, they undergo an extensive three-phase clinical trial process. During phase 1 and 2, drugs are tested on small to medium sized groups of patients to examine toxicology and pharmacodynamics and to test for efficacy and safety. Then, phase 3 trials administer the drug to an even larger group of patients to confirm efficacy and compare results with other treatments. Not all drugs are successful, however, with many failing because of safety or efficacy concerns. Finally, sponsors submit the results in a lengthy and thorough application to the FDA and wait for approval or denial.

Chin, a neurologist whose work has focused on multiple sclerosis (MS) for more than a decade, was involved in the development of ocrelizumab (Ocrevus, Genentech) from the beginning of its clinical trials. “I worked on the original IND, or initial new drug application, and had a hand in the design of the phase 2 study in relapsing remitting MS,” he said.

For certain physicians in this field of work, the curiosity begins early on in their careers. Sheena Aurora, MD, a medical fellow and migraine launch leader for Eli Lilly and Company became interested in migraine research as a second-year neurology resident. “I started working in clinical research when I was in my residency,” Aurora told MD Magazine. “In fact, I moved from India to the US because I really was interested in research and in India there weren’t any research opportunities.”

A phase 1 trial of galcanezumab (Eli Lilly and Company), a drug that Aurora works on, included 160 healthy participants. Phase 1 trials are typically focused on evaluating toxicity and determining how the drug is metabolized and excreted. These trials usually include about 20-80 participants who are healthy volunteers, though those numbers do vary.

Like many early trials, the phase 1 galcanezumab study focused on the pharmacokinetics and pharmacodynamics of the drug, laying the groundwork for later trials. Later on in the process Aurora helped design the phase 2 proof of concept trial that led to Lilly’s years-long series of trials of the drug for migraine and headache prevention.

According to the FDA, approximately 70% of drugs proceed from phase 1 trials, while just 33% successfully move from phase 2 into phase 3 studies. Understandably, the researchers who dedicate years to working on these efforts are thrilled when progress is made. “I feel like it’s a child as it’s evolving from phase 2 to completion of phase 3 and then through the process of regulatory submission,” said Aurora.

Even with drugs that have successfully passed through phase 1 and 2 trials, uncertainty looms in phase 3. Chin recalled the challenge of designing the phase 3 Oratorio trial of ocrelizumab for primary progressive MS (PPMS) and the numerous hurdles he faced just in planning the study. No other company had successfully conducted a phase 3 trial for PPMS, and very few, he pointed out, had even made an attempt.

“There were a lot of unknowns that we had to overcome and some of the challenges in designing clinical trials include having the right outcome measures, understanding how they behave, the statistical analysis of the primary endpoint, selecting the right patient population, and also the operation conduct of the study,” said Chin. “All of these things had to be put together. There really is no guarantee that you’re going to be successful.”

A key characteristic of phase 3 trials is their length, especially those studying progressive diseases like multiple sclerosis. The Oratorio trial began in early 2011 and lasted through the fall of 2015. “During that whole time there’s no way to know if the investigational medicine is effective or not – we found out at the very end,” Chin said.

Typically, these pivotal trials also include much larger groups of participants, from about 1000 to 3000. However, in studies for less common conditions those numbers may be smaller. The Oratorio trial, for example, included 732 patients with primary progressive MS and the phase 3 trials of galcanezumab for migraine prevention, EVOLVE-1 and -2, included 862 and 922 patients, respectively. Conversely, the now-approved asthma drug, benralizumab, was tested in 1306 patients during the CALIMA phase 3 trial.

No matter the number of patients or the length of the trial, the wait doesn’t end with the last administered dose or recorded piece of data. Trials of this size and scope are followed by lengthy data analysis. Teams of statisticians and programmers clean and process the massive database in a systematic approach, which is pre-specified in the study design to avoid bias.

When the data analyses are finally complete, the research team comes together to hear the results. For some, like the ocrelizumab team, these gatherings are a wonderful celebration. “It was just a really gratifying moment,” said Chin, recalling the joyful crying and cheering that filled the room that day. However, not all studies end with such celebration.

“Obviously, it’s disappointing,” Aurora said. “You wonder about it. Is it the biology that is different? Why didn’t it separate from placebo? That’s where the scientist in me comes out and says ‘Let’s look at the science.’”

In a competitive arena, negative results can be a major setback for pharmaceutical companies as well as the patients they ultimately hope to serve. However, researchers emphasize the value of negative results that put the research one step closer to a treatment that will improve patients’ lives.

“I’m a big fan of not only publishing positive data, but also contributing to science with negative data because we can learn so much about the disease and mechanism by publishing our negative studies as well,” Aurora said.

Another process awaits the drugs that show promise during preclinical lab studies and continue to succeed throughout the phases of clinical testing – thorough vetting by the FDA, specifically the Center for Drug Evaluation and Research (CDER). “An enormous amount of work occurs involving hundreds of people and interactions with approval agencies,” Chin explained.

Since 1938, a new drug application (NDA) has been submitted to the FDA for every new drug approved in the US. These thorough applications include safety and efficacy data from all stages of preclinical and clinical trials, proposed labeling, information on potential drug abuse, patent information, data from any studies conducted internationally, information on institutional review board compliance, as well as directions for use.

Chin remembered that the ocrelizumab application contained millions of pages of data pulling from studies along each step of the process. “There’s an army of people that actually have to complete that process for a program that’s as large as the ocrelizumab program,” he said. “But it’s well worth it because there’s a good chance that at that point, with positive data from phase 3 trials, the drug may be approved and have a good chance of potentially transforming people’s lives.”

The FDA has had a two-tiered evaluation process in place since the Prescription Drug User Fee Act (PDUFA) was passed in 1992. The Standard Review takes about 10 months, while drugs granted Priority Review are fast-tracked to a 6-month time-frame.

Priority Review may be granted to drugs that display evidence of effectiveness in treatment, prevention or diagnosis of a condition, that eliminate or reduce a drug reaction, that improve patient compliance leading to improvement in serious outcomes, or that show safety and efficacy in a new subpopulation. Ocrelizumab, with its potential to significantly reduce disability progression in patients with PPMS and relapsing remitting MS, was granted Priority Review in addition to the Breakthrough Therapy designation it had already obtained.

Following the acceptance of an NDA submission, an FDA review team of medical doctors, chemists, statisticians, microbiologists, pharmacologists, and others works to determine whether data show that the drug’s benefits outweigh its risks. Additionally, for some cases the FDA includes an advisory committee to provide independent assessment of the application.

"Some considerations would be if it's a drug that has significant questions, if it's the first in its class, or the first for a given indication," said Mark Goldberger, MD, a former director of one of CDER's drug review offices. "Generally, FDA takes the advice of advisory committees, but not always," he says. "Their role is just that – to advise."

After months of deliberation and input from the team of expert reviewers, the FDA issues either an approval or complete response letter. Drugs may be delayed or denied due to safety issues, a failure to sufficiently prove efficacy, or problems with the drug manufacturing process, which is also inspected by FDA officials.

Once again, however, Chin and the team working on ocrelizumab had reason to celebrate. The FDA’s approval of ocrelizumab on March 28, 2017 made waves as it became the first drug approved for the treatment of primary progressive multiple sclerosis.

Chin’s pride while recalling that day was unmistakable. “I’m having a hard time finding the words to describe this feeling. Joy and gratification are the two words that come to mind,” he said. “There’s also a sense of achievement on behalf of people, knowing that now, the drug that you worked on and that so many other people worked on over such a long period of time, is actually going to make a difference in some people’s lives and hopefully many people’s lives for a long time to come.”

In 2017 the CDER approved 46 novel drugs, over twice the number approved in 2016. So far this year, the agency has approved 15 new drugs. Many more are in review, including galcanezumab for the prevention of migraine, which will likely face a decision by the end of 2018.

In the end, whether end points are met and applications are approved or not, clinical researchers know they are in this process for the long haul as they continually work to develop treatments and improve our collective knowledge of how drugs can help clinicians treat their patients.

“Clinical research is somewhat of an infinite relay race,” Chin said. “You always learn from the last leg, whether it’s positive or negative, and the baton is passed to the next sponsor of a new clinical trial to take what was learned from the last one and design a better trial in the hopes of being successful or being more successful.”