The Pursuit of Food Allergy Vaccine 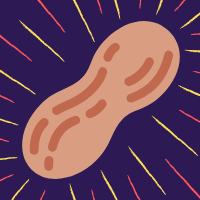 A young college student wades through his campus cafeteria, eyeing his options for breakfast laid in front of him in heated metallic trays.

On any given school day, a student such as him—a young man recently given a new idea of what individual freedom is, no less—will make a few dozen minute decisions for himself. How should he take notes in class? When should he study? Does he have time for a club meeting? Should he go out with friends tonight? When is he going to get laundry done?

There’s enough choices to make up this student’s day that something as simple as grabbing breakfast should be no matter at all. Yet, it requires more scrutiny than all the other decisions combined. He takes his time surveying each heat lamp-warmed tray with an eye and mind that's been sharpened by fear of his disease for 2 decades now, every day, at least 3 times a day.

He settles on scrambled eggs, a fixture of the American breakfast which very rarely ever associates with his potentially lethal allergen: seafood. Even if there was a remote risk, he was on omalizumab (Xolair), an immunoglobulin E (IgE)-binding agent that even made group trips to a Benihana restaurant manageable for him on certain days.

In moments after eating his breakfast, the student’s blood pressure dropped, his pulse weakened, and his airways narrowed. The eggs were cooked next to a batch that contained salmon, and it triggered his allergic response. He was going into anaphylaxis.

One ambulance ride and two epinephrine injections later, the student was stable again. He was one of many patients under Teresa Neeno, MD, burdened with potentially fatal food allergy—and this was just one of many days where the risks were too much.

Neeno, a California-based allergist/immunologist who spent 2 decades practicing in Anchorage, Alaska, told MD Magazine® that avoidance has been the de facto food allergy treatment response since she started medical school.

Baked into that avoidance is fear—from both patients their caregivers.

What would it take for fear to be removed from food allergy healthcare? Immunotherapy has been practiced and evidenced long enough and well enough to serve a role in treatment cases, yet physicians balk at re-introducing an allergen. Therapies regulated and marketed through the US Food and Drug Administration (FDA) pipeline will be available soon, but would that still ease patients’ minds?

What it may take is absolute assurance that a patient is safe—symptomatically, chemically—from allergic response. A vaccine that could modify a patient’s entire immune system would be the “holy grail of food allergy,” Neeno said.

And it may be coming soon.

Earlier this month, the National Institute of Allergy and Infectious Diseases (NIAID) awarded a $3.2 million contract to aid in the preclinical research and preparation of an FDA Investigational New Drug (IND) application for an intranasal peanut allergy vaccine.

The difference in treatment, relative to immunotherapy, is that the exposure is in micrograms, and is ingested nasally. As Ali Fattom, PhD, senior vice president of Vaccines R&D at BlueWillow explained to MD Mag, this limits its interaction with the cells and shifts patients’ immunoresponse to the allergen.

At least, that has been the case in a trio of animal model toxicology studies which led to the NIAID grant. Now BlueWillow has a chance to prove the clinical benefit of a prophylaxis pathway they’ve spent the last 15 years researching.

“The problem is that in the last few decades, people were always looking at immunotherapy,” Fattom explained. “People stopped looking for the vaccination.”

Immunotherapy has proven effective in many younger patients with food allergy, and has progressed the field greatly from the old “avoid the food at all costs” adage—but it does require a continued, consistent exposure to the allergen. Any misadherence requires it at least be restarted and dosed increasingly again.

Fattom and colleague’s vaccine would be a far less intensive allergen exposure intranasally, which would generate a memory in the allergic system that abolishes reactions which cause the symptoms of anaphylaxis.

Though this vaccine is targeting peanut allergy—the most common food allergy in the US—it could potentially be adjusted and applied to other common allergies. Fattom noted a group in Michigan has begun publishing work on a similar vaccine, delivered in a similar fashion, showing capability in shifting mouse model immunoresponse to a non-allergic plane for cow milk.

“It can work across the board,” he suggested.

Of course, tailored food allergy vaccinations could only have a great effect if at-risk patients are consistently screened and identified. There’s also questions surrounding the clinical outcomes associated with nanoemulsion and intranasal application, especially when considering their application in other vaccination efforts.

Whitney Morgan Block, MSN, CPNP, FNP-BC, president, chief executive officer and founder of the National Allergy Center, recalled to MD Mag the introduction of intranasal influenza vaccines for patients who’d prefer it over an injection. The logic was sound—that the driving factors of flu most frequently infect patients through their nasal pathway—and early trials showed efficacy. But the actual application was less beneficial.

“What we found in practice was it wasn’t as effective, when compared to the regular injection shot,” Block said. “Allergies and viruses are obviously not being looked at the same way, but that’s something I don’t want people to get too excited over.”

Neeno expressed her own concerns over the vaccine’s effect on IgE count. Though the antibody drives allergic reaction, it is also critical in combating parasitic infection. “What if it negatively affects the immune system? What if there’s an adverse event?” she asked.

Still though, the potential is obvious to caregivers. Block suggested a developed understanding of the inflammatory system through such research could translate into new therapies for cancer, immune deficiency, or other disorders. “It could help not just food allergies, but all disorders within asthma and atopic dermatitis.”

If either agent proved efficient in long-term clinical assessment, it’d be an upgrade from the limited benefit observed in immunotherapy care.

“It seems like we’re currently training the body, but if you go off of your maintenance, your allergy will come back,” Block said. “If it works for everybody and if we can figure out how this works, it would really be a game-changer in the sense that it might actually change the immune system, not just train it.”

The difference in those effects isn’t reserved to improved patient safety; it would guarantee US physicians, patients, and their families a new level of assurance, and quality of life.

Fattom’s move from Palestine to the US put into perspective the national prevalence of food allergy. In short time he met a handful of families burdened with allergies—everyone from the grandparents to their grandchildren. Indeed, some of the most recent data showed nearly 11% of the US population suffers from a diagnosed food allergy, and twice that population believe they have one.

Additional data from the American College of Allergy, Asthma & Immunology showed peanut allergy, in particular, may have nearly doubled in a decade among US residents.

“It’s unbelievable,” Fattom said. “They are always living in fear something is going to happen to them.” He described meeting young patients isolated at school or during meals for the sake of their condition—a common issue among Neeno’s patients as well.

The benefit of immunotherapy may be the difference of being able to tolerate 1-6 peanuts at a time without severe reaction, but that’s enough for Neeno to advocate it for appropriate patients who could enjoy a better sense of normalcy. Better easier said than done: despite the proven benefit in the groundbreaking Learning Early About Peanut Allergy (LEAP) Study, allergen exposure is a tough sell to patient families.

“That’s really the message: there’s still a lot of people that are afraid to treat,” she said. “We need to spread the message that this is our effective treatment, and we need to treat early and aggressively.”

She does believe the FDA’s approved marketed and regulation of labeled immunotherapy options will play a difference in patient adherence, but exactly to what extent is unknown. Either way, it will be available much sooner than any vaccine.

Neeno recalls having no therapeutic options for allergic angioedema just a decade ago. Today, there’s 7-8 options at her disposal. Medicine takes a long time to progress to patient care—but when it does, the variability comes quick.

She doesn’t anticipate a food allergy vaccine to reach the market anytime soon, but then again, the idea didn’t even seem feasible when she was a medical student. “I don’t see an overall vaccine coming in my lifetime, but I do see more people having easier time with allergies,” she said.

What comes next for the BlueWillow candidate are a pair of research trials—one in humans—designed to prove its efficacy, to couple with data showing its immunogenic and safe outcomes. The company will also conduct a long-term animal assessment to observe its immune response benefit over years, Fattom said, though there’s already belief the vaccine’s effect is persistent.

What may eventually follow is consideration for food allergens outside of peanut. “People are seeing a light at the end of the tunnel for this condition,” Fattom said. “I think it’s a game changer, and will make lives much easier.”

Block believes there may be issues in filling research trials with eligible patients, noting the validation process for something as intricate as food allergy vaccination would be rigorous on any candidate. “And that takes a lot of time, a lot of money, a lot of effort, and a lot of coordination,” she said.

Still, she agrees with both the clinician and the developer when she considers what a food allergy vaccine would mean for patients—like the college student who could be risking his life over something as simple as breakfast.

“Knowing about these vaccines are a great thing to have in your back pocket, to be able to encourage families that there is hope—we are working on it, researchers are out there, and it’s not going to be like this forever,” she said.

Click here to sign up for more HCPLive® content and updates.
Related Coverage >>>
FDA Approves Two Prescription Allergy Eye Drops for OTC Use
Implementing Price Transparency Tools at Ambulatory Care Centers
Ustekinumab Successful as a Target Therapy for Crohn's Disease
You May Also be Interested in
Most Popular
The Fear of the Coronavirus, and the Reality of the Flu
Magic Johnson Celebrates Life 25 Years After HIV Diagnosis
Top 10 Painkillers in the US
When to Suspect Diarrhea is Symptom of a Clostridium Difficile
Depression Linked to All-Cause and Cardiovascular Mortality