FOCUS Looks to Help Military Families During and After Deployment 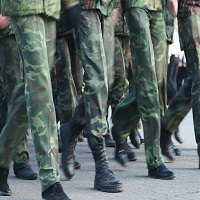 Study findings indicate that a family-level preventive intervention appears to help improve behavioral health outcomes in military families who are affected by the wartime deployment of a family member.

Published in the January 2016 issue of the Journal of the American Academy of Child and Adolescent Psychiatry (JAACAP), the study found significant reductions in anxiety and depressive symptoms among the deployed parent, the parent at home, and their children following participation in the intervention.

The study evaluated the longitudinal outcomes of the Families OverComing Under Stress (FOCUS) preventive intervention, designed to enhance resilience and reduce psychological health risks in military families and children with high levels of stress related to parental wartime military service.

Patricia Lester, MD, who serves as Director of the Nathanson Family Resilience Center and Medical Director of Child and Family Trauma Service as well as the Jane and Marc Nathanson Family Professor of Psychiatry at the UCLA Semel Institute, and colleagues performed a secondary analysis of evaluation data from a large-scale service implementation of the FOCUS intervention collected between July 2008 and December 2013 at 15 military installations in the United States and Japan.

In JAACAP, Lester and colleagues presented data on more than 2,600 families, including nearly 3,500 parents and more than 3,800 children aged 3 to 17-years-old. Whereas FOCUS was found in previous research to be feasible, acceptable, and able to demonstrate preliminary effectiveness in improving family adjustment and reducing parent and child psychological health risk symptoms, the
impact of FOCUS for each family member over time was assessed from the current study.

Improvements were observed in psychological health outcomes in both parents, including significant reductions in clinically meaningful anxiety and depression symptoms (23% at intake to 11% at follow-up), and these reductions were maintained at two subsequent follow-up assessments. Children who received the intervention experienced a reduction in self-reported anxiety symptoms, from 14.5% at intake to 11.8% at follow-up. Lester and colleagues also observed reductions in the prevalence of unhealthy family functioning and parental posttraumatic stress symptoms.

According to a press release from Elsevier, “the authors concluded that the underlying ecological framework and attention to the reverberating impact of challenges, like military service, on each member of a family system allows FOCUS to address stress at the family level. The findings of improvement for both children and parents alike provide further support for this framework, underscoring the importance and potential of family-level prevention and intervention when it comes to enhancing the well-being of military children and families.”

Click here to sign up for more HCPLive® content and updates.
Related Coverage >>>
Baloxavir Effective in Preventing Spread of Flu
Investigators Test Treatment Regimens for Psychiatric Disorders with Insomnia
Childhood Sleep Issues Foreshadow Psychosis, Borderline Personality Disorder
You May Also be Interested in
Most Popular
Denise Daley, PhD: Early Asthma Interventions for Infants
Top 10 Painkillers in the US
Opinion: Fellow Physicians, Please Stop Devaluing Your Medical License
How to Spot a Bad Doctor
Flu Cases Near 30 Million in the US, CDC Reports