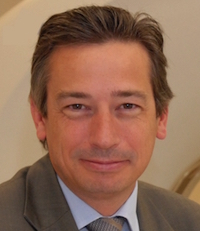 David E. Newby, MD
The five-year update to the open-label, multicenter, parallel-group analysis of CT coronary angiography (CTA) in patients with suspected angina due to coronary heart disease (SCOT-HEART) has reported that CTA in combination with standard care for stable chest pain may reduce death rates from future myocardial infarctions.

The update, presented at the European Society of Cardiology (ESC) 2018 Congress this weekend, reported significant improvements in future cardiovascular risks in patients at risk for chronic angina initially referred for CTA plus standard care, versus those only referred to standard care. The Scotland-based results were backed by the analysis of 4146 patients, and 20,254 patient-years of follow-up.

Though the trial was designed and operated similarly to the Prospective Multicenter Imaging Study for Evaluation of Chest Pain (PROMISE) study at about the same time—with both presenting initial data in 2015—the SCOT-HEART trial differs in that it will continue to assess for long-term results beyond this update, study author David E. Newby, MD, said in an interview with MD Magazine®.

“The beauty of the SCOT-HEART trial is the whole country’s electronic health records are kept and updated together,” Newby said.

Investigators originally assigned 4146 patients who had been referred to a cardiology clinic for stable chest pain to be evaluated either with or without CTA included with standard care (n= 2073, each). They sent the primary endpoint as patient death from coronary heart disease or nonfatal myocardial infarction at 5 years.

Mean patient age was 57.1 years, with men making up 56% (n = 2325) of the population. Mean body-mass index was 29.7. The most commonly reported cardiovascular risk factors included being a current or former smoker (53%), hypercholesterolemia (53%), and a family history of cardiovascular heart disease (42%). Median patient follow-up duration was 4.8 years.

That said, preventive therapies were more frequently initiated in patients provided CTAs (OR 1.40; 95% CI; 1.19-1.65), as were antianginal therapies (OR 1.27; 95% CI; 1.05-1.54). Newby noted that there’s often a “big to-do” in the idea of providing a patient preventive aspirin therapy on top of statins. He advocated against it, but noted it has its place in coronary treatment.

“The difference is we see people who actually already have artery disease here,” Newby explained. “You haven’t prevented it, but you’re trying to prevent it in future instances.”

The team concluded that CTA in addition to standard care results in significantly lower rates of death from coronary heart disease or nonfatal myocardial infarction at 5 years than lone standard care. The supplemental procedure was also proven to not result in significantly greater risks for coronary angiography or revascularization in that time period.

Newby noted there were early returns on death rates which imply CTA screening is beneficial for long-term mortality, but that the data remains statistically significant until more events occur. He also believes its long-term benefits can be cost-saving for patients—but that’s more data due in following years.

“The bottom line for me is, if you’re being tested for heart disease, get a CT,” Newby said. “Physicians should focus on getting the right patient on the right treatment.”

The study, "Coronary CT Angiography and 5-Year Risk of Myocardial Infarction," was published in New England Journal of Medicine on Saturday.