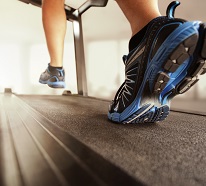 Patients with multiple sclerosis (MS) who want or need to measure their daily step-count may get the most accurate results with the waist-worn FitBit One, according to a recent study. Conducted by Julia Balto, MS, of the Department of Kinesiology and Community Health at the University of Illinois, and colleagues, the study was published in MSJ Experimental Translational Clinical recently.

The researchers tested five wearable motion sensors and said that “persons with MS walk more slowly and have gait alterations compared with adults from the general population, and such patterns might influence the accuracy and precision of the applications and motion sensors for measuring steps taken while walking.” In order to compensate they say they used “direct observation as the gold standard, while walking 500 steps on a treadmill.”

There were a total of 45 patient participants, and the tested devices included the Digi-Walker SW-200 pedometer (Yamax), UP2 (Jawbone), UP Move (Jawbone), Flex (Fitbit) and One (Fitbit), as well as 3 smartphone applications, Health (Apple), Healthmate (Withings), and Moves (ProtoGeo Oy).

“Overall, the Fitbit One had the best absolute and relative accuracy and precision of all eight applications and devices across repeated trials, and the results regarding accuracy are entirely consistent with previous research involving healthy adults,” report the researchers.  They go on to note a variation in the metrics of the different sensors and theorize that could be due to the location of the device on the body.

They also found that accuracy was affected by speed, or more correctly, by lack of speed, saying, “slower walking speed was associated with larger relative error” in the two waist-worn sensors they tested. They add, “The observed decline in device accuracy across slower speeds is consistent with the body of research on the use of accelerometers in MS.”

The authors conclude by saying “Researchers and clinicians should consider these results when choosing a commercially available motion sensor or application for use in persons with MS.”

Click here to sign up for more MD Magazine content and updates.
Related Coverage >>>
Post-Stroke Health Better Among Young Minority Patients Than White Patients
Elagolix Reduces Heavy Menstrual Bleeding in Women with Uterine Fibroids
Postpartum Depression Linked to Pediatric Dermatitis
You May Also be Interested in
Most Popular
Coronary Calcium: Does It Add Anything to Our Armamentarium?
Ethical Dilemmas in Primary Care: Applying Objective Standards to Individual Patients
Cost-Effectiveness of PCI in Patients With Stable CAD, Abnormal FFR
Pneumonia Symptoms, Burden Lengthened in COPD Patients
Top 10 Painkillers in the US