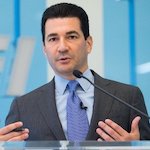 According to a report from The Washington Post, Gottlieb resigned from his position Tuesday, to be effective in 1 month. The reason given for his resignation, according to an unnamed administration official, was his desire to spend more time with his Connecticut-based family.

Gottlieb confirmed his resignation in a statement Tuesday afternoon, in which he reiterated his desire to spend more time with his wife and 3 young children. As he moves off his position in the coming weeks, he expressed intent to further advance new policies, secure the 2020 administration budget, and aid the FDA in transitioning to new leadership.

"I'll depart knowing the FDA is strong, its people outstanding, and its mission well recognized and deeply respected across the government, and indeed, across the world," Gottlieb stated. "I hope to have the opportunity to continue work with you to advance our goals in the weeks before I depart."

In his letter of resignation to Health and Human Services Secretary Alex Azar, provided to MD Magazine® by the FDA, Gottlieb highlighted efforts made during his 23-month tenure to: "Working together, my colleagues and I achieved all of these goals, and much more," Gottlieb wrote. He also highlighted his administration's work in regulating sham therapies, providing medical supplies and care in the aftermath of Hurricane Maria in Puerto Rico in 2017, and continuing necessary work through the recent federal government shutdown.

"All of these efforts will have palpable impacts on the health of patients and the safety of families," he wrote. "We did all this, and much more, through the hard work, scientific prowess, and public spiritedness of one of the most talented workforces in the federal government."

A representative with the FDA stated the administration does not currently have information as to who will assume Gottlieb's role as commissioner.

Gottlieb, 46, has held the position since May 9, 2017, when the Senate confirmed his appointment with a 57-42 vote. Prior to his role with the FDA, he worked as clinical assistant professor at the New York University School of Medicine, FDA Deputy Commissioner for Medical and Scientific Affairs, and as a venture partner with New Enterprise Associates.

A cancer survivor, Gottlieb was once an adviser to the National Coalition for Cancer Survivorship, and served as a senior policy advisor to the Administrator at the Centers for Medicare & Medicaid Services. Some of his highlighted work included a role in the implementation of the Medicare Prescription Drug, Improvement, and Modernization Act.

In a statement regarding his resignation, Azar called Gottlieb an “exemplary public health leader, aggressive advocate for American patients, and passionate promoter of innovation.”

“I will personally miss working with Scott on the important goals we share, and I know that is true for so many other members of the HHS family,” Azar said. “The public health of our country is better off for the work Scott and the entire FDA team have done over the last 2 years.”


Since Gottlieb has come into his role, he has advocated for an improved regulatory process between the administration and drug makers. This January, he and Jeff Shuren, MD, Director of the Center for Devices and Radiological Health, announced that a record 106 novel devices were approved for the market in 2018.

In 2017, the FDA reported a record rate of novel therapy applications filed under priority review (63). Along the way, Gottlieb has reiterated his administration’s intent to improve the market’s offering of generic therapy options—including means of limiting brand drug makers’ efforts against generics.

In a tweet addressing his resignation, President Donald Trump confirmed the timeline of Gottlieb's resignation and praised his work in the generic therapy market.

....Scott has helped us to lower drug prices, get a record number of generic drugs approved and onto the market, and so many other things. He and his talents will be greatly missed!