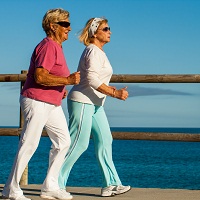 Exercise may improve quality of life for patients with rheumatoid arthritis (RA), according to research presented at the American Public Health Association annual meeting in November.

Researchers from the Hospital for Special Surgery (HSS) conducted a study of 1,400 adults who participated in various exercise programs at the hospital during the course of the study. The study began in 2011 and incorporated low cost classes lead by certified instructors in areas of pilates mat, therapeutic yoga, yoga-lates (hybrid yoga plus pilates), tai chi, and dance. The once weekly classes were open to the public.

The majority of the patient population were aged 75 or older, and were 92 percent women. The others in the group were aged 75-84 years (36 percent), over 85 years (31.2 percent), aged 65-84 (24.8 percent), and under 65 years (8 percent). There were 204 individuals who completed questionnaires both before and after the conclusion of the exercise program, which covered the study period of September 2011 to July 2014.

“The study adds to the growing body of evidence that exercise can help people with muscle and joint conditions,” Sandra Goldsmith, MA, MS, RD, director of Public and Patient Education at HSS, explained in a press release. “Our data indicate that hospital based programs can play an important role in pain relief, improved quality of life, and improved levels of physical activity in older individuals with musculoskeletal conditions.”

After completing the classes, fewer participants experienced high levels of muscle or joint pain from their condition (56 percent before the program’s inception compared to 47 percent upon cessation). Statistically significant reductions in how much patients’ pain interfered with their general lifestyles such as activities, the ability to walk, mood, sleep, and enjoyment of life were also reported.

A majority of patients reported a reduction in stiffness, improvement in balance, and feeling less fatigued as a result of participating in the program at rates of 83 percent, 82 percent, and 67 percent, respectively.

“Often patients with musculoskeletal disease are more deconditioned than their disease free counterparts,” continued HSS rheumatologist Linda Russell, MD. “Strengthening the muscles around an arthritic joint has been shown to slow the progression of osteoarthritis and reduce pain.”

The greatest relief from muscle and joint pain was found in patients who participated in tai chi, specifically.

“The survey results indicate that the hospital’s exercise programs have a positive impact on the musculoskeletal health of participants,” concluded Goldsmith. “HSS will continue to offer these programs to this community to help them stay active, decrease pain and improve their overall health.”