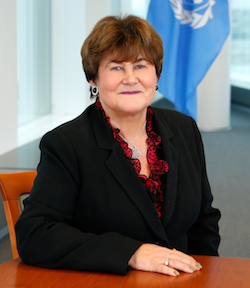 People with HIV are among those most susceptible to contracting tuberculosis (TB). A new report from the European Centre for Disease Prevention and Control (ECDC) and the World Health Organization (WHO) Regional Office for Europe found that the coinfection rate of these two diseases substantially increased within five years. On the heels of World Tuberculosis Day (March 24), this is likely not the news physicians want to hear.

“The flare-up of TB/HIV co-infections from 2011 to 2015, together with persistently high rates of drug-resistant TB, seriously threaten progress made towards ending TB, the goal that European and world leaders have committed to achieve by 2030,” Zsuzsanna Jakab, PhD, (photo) director of the WHO Regional Office for Europe, said in a news release.

The 53-country report said that new TB cases decreased by 4.3% and deaths from the lung infection decreased by 8.5% between 2011 and 2015. During this period, new TB cases and relapses decreased by 17.5%, bringing the rate from 35 to 29 cases per 100,000 population. However, the researchers explained that the rate change is mostly due to a lack of notification among the 18 high-priority countries.

“The general downward trend in reported TB cases is encouraging, but some groups are not benefiting from this trend and we need to target our efforts better if we want to end the TB epidemic,” said Andrea Ammon, MD, MPH, ECDC acting director.

“One in three people co-infected with TB/HIV do not know about their status, which drastically lowers their chances of being cured,” Jakab continued. “In turn, this favors the spread of the diseases, putting health systems of governments under pressure.”

The analysis included countries both in and out of the European Union (EU)/European Economic Area (EEA). The report documented numbers on both overall TB cases per country, TB cases in people with known HIV status, and TB cases in people who were HIV-positive.

Only 22 countries provided ART rates in HIV-positive people in 2015. Although numbers were better in 2014 than 2015, ART use was still significantly under the WHO target. In addition, EU/EEA countries were under the global target of 85% for successfully TB treatment in co-infected individuals.

“Although we know about the challenges of TB/HIV co-infection, for two out of three TB patients the essential information on their HIV status was not reported in 2015,” Ammon concluded. “We need to get better at this.”

Click here to sign up for more MD Magazine content and updates.
Related Coverage >>>
Investigators Link Farm Proximity Residence to C. Difficile
The 10 Most Read Articles of 2019
HCV-Positive Hearts Could Increase Donor Pools
You May Also be Interested in
Most Popular
Top 10 Painkillers in the US
How to Spot a Bad Doctor
5 Doctor Specialties Facing Shortages
Suffering in Silence: The Scourge of Physician Suicide
Phase 3 Study Supports Use of Teprotumumab for Thyroid Eye Disease