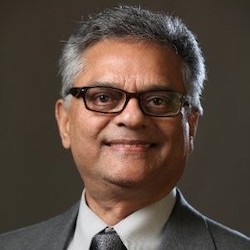 Dilip Pandey, MD, PhD
Patients with epilepsy who live in high crime areas of Chicago had 3 times the rate of seizures as those in low crime neighborhoods, according to the first study to investigate the relationship between crime in Chicago neighborhoods with epilepsy severity and seizure frequency.

The results of the study were presented by Jessica Levy, research coordinator and graduate student, University of Illinois at Chicago (UIC), Chicago, IL, at the American Epilepsy Society 2018 conference in New Orleans.

Dilip Pandey, MD, PhD, Associate Professor and Director of Clinical Research, Department of Neurology and Rehabilitation, UIC College of Medicine and the principle investigator, discussed the implications of the findings with MD Magazine®, recommending that practitioners provide "close monitoring of follow-up visits in consideration of environment and neighborhood."

Pandey is also co-principle investigator of the PAUSE To Learn Your Epilepsy study at UIC, from which the current study cohort was drawn. The PAUSE is a study of the effectiveness of a tablet computer-based, personalized, and self-managed education for patients with epilepsy from underserved populations.

To distinguish between the crime levels in the neighborhoods of the 57 study participants, the investigators extracted data from the City of Chicago Police data portal corresponding to resident zip codes and created the 2 per capita index variables of Total Crimes and Crimes Against People. The 4 neighborhoods with the highest crime index were identified as high crime, with the remaining 4 characterized as low crime. Participants self-reported their number of seizures.

Total crimes per capita in a 1-year period ranged from 17 in the Southside of Chicago where 4 study participants resided, to 3.1 in the Northwest where 8 participants resided. In a 30-day monitoring period, persons with epilepsy living in the high crime neighborhoods experienced an average of 3.1 seizures compared to 1.0 among those in low crime neighborhoods. Over 90 days, the average number of seizures were 8.2 vs 2.3, for high crime and low crime areas, respectively.

The investigators suggest their results reflect the importance of perceived stress as a potential trigger for persons living with epilepsy, and that neighborhood violence and crime represent significant environmental stressors.

“Understanding the impact of violence and crime as potential triggers for seizures underscores the need for further research that might allow clinicians to make better-informed recommendations for self-management education and stress management skills,” Pandey stated.

The study, PWE From Underserved Populations Living in High Crime Neighborhoods have Higher Seizure Frequency, was presented at the American Epilepsy Society 2018 conference in New Orleans.