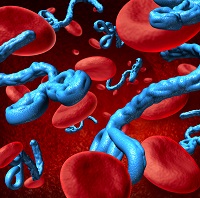 The US Centers for Disease Control and Prevention (CDC) has come up with a definitive answer to the question of how long the Ebola virus can survive on surfaces outside a living host.
In temperature and humidity meant to simulate a climate-controlled hospital environment, the virus lived for days, including 5 days on stainless steel. It survived 11 days on plastic and 14 days on Tyvek, the material used in protective suits. The plastic used in the test was Teflon.
In a CDC report released May 4, National Institutes of Health contract researchers in Montana evaluated the stability of the virus on surfaces and in fluids. Their study was focused on the Makona-WPFCO7 strain, the one found in the current Ebola outbreak in Guinea.
The team looked at how long this strain of Ebola survived on stainless steel, plastic, and Tyvek, as well in water, human blood, and blood from infected nonhuman primates. They ran the tests under 2 environments: heat and humidity like that found in West Africa, and the conditions found in a climate-controlled hospital.
“We found that Ebola virus can persist on surfaces common in an Ebola treatment unit, highlighting the need for adherence to thorough disinfection and doffing protocols when exiting the Ebola treatment units and careful handling of medical waste,” lead researcher Robert Fischer, PhD, of the viral ecology unit at the NIH/NIAID viral ecology unit in Hamilton, MT, said. The virus generally lived for shorter periods in the heat and humidity meant to simulate the environment of West Africa.
In an email, Fischer further explained that on stainless steel at 27°C (80.6° F) and 80% humidity the virus was detected on day 2 but not on day 3. But in simulated hospital-like conditions of 21°C (69.8° F) and 40% humidity, the virus was detected on day 5--though not on day 8 or later.
The researchers sampled the virus specimens at 6 hrs, 12 hrs, 1, 2, 3, 4, 5, 8, 11 and 14 days, Fischer said.
Still, the danger the virus poses also depends on how much is originally deposited on a surface.
“Because the time it takes until no virus can be detected depends on the original amount of virus deposited on the surface of the material we determined the decay rate from the log linear regression,” he said.
For stainless steel at 27°C, the amount of viable virus decreased by 1 log every 0.45 days and at 21°C the amount of viable virus decreased by 1 log every 1.3 days.
In the hospital conditions, the virus titer on steel was reduced significantly faster than on plastic and on Tyvek, but there was no significant difference in reduction between Tyvek and plastic. In more tropical conditions, there was no significant difference in virus titer reduction on steel and on plastic. However, virus decayed more slowly on Tyvek than on steel and on plastic.
There was no significant difference in reduction rate in virus titer in drying human blood in hospital or tropical conditions. The stability of the virus in liquid blood did not fit a linear regression model. The virus was reduced significantly faster at 27°C than in water at 21°C.
Further, the team found, the virus lives for a long duration in liquid blood than in dried blood (in one instance it was found in a deceased Ebola victim7 days after death) and it remains viable in water for 3 days at 27°C, and 6 days at 21° C.

Click here to sign up for more HCPLive® content and updates.
Related Coverage >>>
David Karp, MD, PhD: ACR Hydroxychloroquine Suggestions for Rheumatology and COVID-19
FDA Authorizes Five-Minute COVID-19 Test
ACR Issues Recommendations for Hydroxychloroquine Use for COVID-19
You May Also be Interested in
Most Popular
Gastrointestinal Issues Could Help Diagnose Coronavirus
Flu Cases Near 30 Million in the US, CDC Reports
Comparing RT-PCR and Chest CT for Diagnosing COVID-19
Concern Over Sleep Apnea and Coronavirus Transmission
Vaping Use Associated with Greater Short-Term Cessation than Counseling