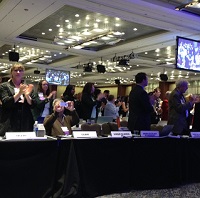 In a dramatic show of new-found solidarity, the American Medical Association’s House of Delegates today in Chicago, IL, approved a resolution to take a stand against gun violence and to lobby Congress to repeal a ban on funding research into its causes. The resolution calls gun violence a public health problem.

The near-unanimous vote (Photo above) came as 55 co-sponsors signed on to the resolution last night as supporters of the measure. It originated with the AMA House of Delegates LGBT advisory committee.

Leading up to the vote this morning, many delegates offered impassioned pleas asking colleagues to endorse the measure.

Sponsor Josh Cohen, MD, of New York City, one of the original sponsors noted that “Gun violence numbers continue to increase. .. America is looking to its physicians for their voice and leadership.”

There has been a 20-year ban on funding gun violence research that could lead to gun control measures.

A Wisconsin delegate spoke of a conversation with US Centers for Disease Control and Prevention’s director [Tom Frieden, MD] in which gun violence came up.
“He said ‘ stop we can’t have a conversation about this and don’t put it in a letter, stop,’,” the delegate said.

“That’s how political this is and we have to fight it,” he said.

Others told of their personal experiences treating victims or offered one-word evocations of past mass shootings: Columbine, Sandy Hook, San Bernardino, and more.

One delegate noted that the AMA’s gay delegates often go to clubs in the cities where the AMA House of Delegates holds its meetings.

The next such meeting is already scheduled for Orlando, FL.

“Had this taken place during the interim meeting [in Orlando] I guarantee you we would be having a moment of silence for delegates we had lost,” he said.

“We are shaken, this hit home for us and our community in Orlando,” he said.

Another speaker noted that even as the delegates were debating and socializing over the course of the meeting, there were six shooting deaths in Chicago.

AMA past president Richard Corliss, MD, spoke urging adoption and assured members that the AMA was not trying to prevent anyone from having a hunting weapon or one for self protection.

When he was in high school decades ago, he said, “I worked in Newark and in Elizabeth NJ in the emergency rooms and the morgue and in five summers I never saw a patient with a gunshot wound,” he said, “The world is changing and rules have to change, we have to push hard for this research to be done.”

The lone voice of opposition came from NY delegate Robert Hughes, MD, who stood by his position that guns are not a problem, people are. “Guns should not be in this resolve,” he said.io

His objection met parliamentary procedure rules requirement that both sides of an issue need to be heard before a vote. A delegate called the question and by voice vote, the delegates overwhelmingly endorsed to proposal.

After the vote, and a subsequent standing ovation to applaud their decision, the delegates observed a moment of silence for the most recent Chicago shooting victims.