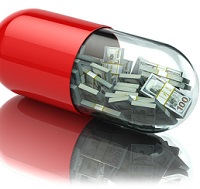 The American Medical Association thinks it may have found a backdoor way to discourage pharmaceutical companies from mounting direct-to-consumer ad campaigns: eliminating their marketing costs as a federal tax deduction.

“We can’t prevent DTC ads undere the First Amendment, but we could eliminate companies’ ability to write off DTC advertising [expense] said a Massachusetts delegate in support of the resolution.

The idea is to change the tax code to eliminate the deduction. The measure is sure to be controversial, and it was immediately opposed by a New York delegate.

“I don’t think we can impose our wishes on the IRS, it’s a valid business expense,” said Bob Frankel, MD, “Should we not allow ice cream ads,” since they may contribute to obesity,  he said, adding, “It’s unreasonable.”

Those supporting the resolution expressed longstanding frustration with pharma’s DTC campaigns, charging that most are for “me-too” drugs that duplicate other products but usually have a higher price. The cost of marketing adds to healthcare costs, they note.

The AMA has already stated its blanket opposition to DTC advertising, saying it causes headaches for physicians who must constantly debate patients’ who are convinced a drug is right for them because they have seen it advertised.

Another issue to be tackled is whether, if such restrictions were enacted, they would apply to all health care advertising, including that of medical device makers, hospitals and healthcare systems, and even physicians themselves.

A delegate from Florida said “We appreciate the concerns and we don’t like DTC advertising either, but we oppose the resolution as a no-win situation that would have negative fallout for the AMA.”

Speaking for the Pennsylvania Medical Society, another delegate said that when it comes to DTC advertising “We lost the battle and this is a way of sneakily getting back at them—one group sniping at another’s taxes.” That could be a risky strategy, he warned.

Click here to sign up for more HCPLive® content and updates.
Related Coverage >>>
Unraveling 1099, W2, W9 for Doctors
You Need an Asset Allocation Plan Even More in a Bull Market
Tax Benefits Of Real Estate Investing
You May Also be Interested in
Most Popular
Gulf War Mystery: Why Is MS Onset Slower in Gulf Vets?
The Fear of the Coronavirus, and the Reality of the Flu
Fluoxetine Reduces Symptoms for Children with Autism Spectrum Disorders
New Immunotherapy Blocks Key Macrophage Checkpoint in AML Care
Top 10 Painkillers in the US