Dialysis Most Effective Treatment for Frail Patients with ESKD 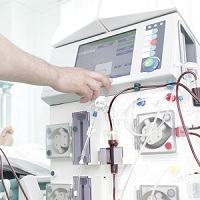 While effective for most, current dialysis guidelines might not be relevant for elderly or frail patients with end-stage kidney disease (ESKD).

The 3990-patient observational cohort on incident end-stage kidney disease patients from January 2007 to December 2008. In the study, patients contributed person-time from the date of the ESKD diagnosis until death, transplant, or the end of the study in December 2014.

The team performed an extended Cox regression model with time-varying exposure to dialysis to account for immortal time bias.

In the study, 70.2% patients initiated dialysis, 78.8% of which initiated hemodialysis (HD) with the remaining 21.2% initiated peritoneal dialysis (PD).

The investigators sought a primary outcome of all-cause mortality.

Starting dialysis resulted in a major improvement for patients, reducing the hazard of death in both elderly and non-elderly patients even after controlling for comorbidities (HR .58; 95% CI, .50-.68 and HR .76; 95% CI .69-.85, respectively).

“Dialysis improved survival in all incident ESKD patients,” the authors wrote. “The findings suggested a larger protection offered by HD. Although improve in survival from initiating dialysis was large, its true benefit should take overall quality of life into account.”

Many patients, particularly elderly patients, who require renal replacement therapies have delayed or rejected dialysis for a number of reasons.

In a 2019 patient survey, family members of patients with end-stage renal disease that are better informed about their end-of-life decisions rate report a higher quality of care.

In the 3369-patient survey, led by Claire A. Richards, PhD, University of Washington, investigators found that patients preparing for end-of-life decisions, improving access to concurrent receipt of dialysis and hospice services aids in improving the quality of end-of-life care for patients undergoing dialysis for end-stage renal disease.

Each patient that participated in the study was treated with maintenance dialysis at 111 US Department of Veterans Affairs medical centers and died between 2009-2015. The mean age of death for the study’s population was 70.6 years.

“Patients who stopped dialysis were more likely to have been receiving hospice services at the time of death than patients who continued dialysis (544 patients [58.1%] vs 430 patients [17.7%]),” the authors said.

The investigators also found that patients who did not stop dialysis, receipt of hospice was linked to a higher probability of the patient’s family rating the quality of end-of-life care as excellent (60.5% vs. 40.0%).